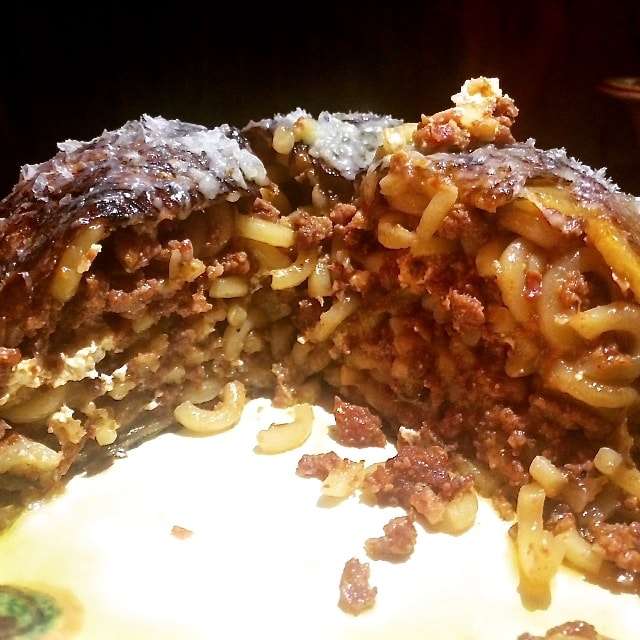 Sessanta is the new Sicilian restaurant at SIXTY SoHo on Thompson that overtook the old Kittichai space. While  you might feel some familiar vibes, it is the same restaurant group that runs Lure Fishbar, Bowery Meat Co., Burger & Barrel, etc. This space is a little different as you cannot see the whole restaurant in once glance. Deep green booths line the inside of the first room that you’ll sink into immediately. The bar seating is pretty cool and caused me to do a double take because it’s two sided, meaning that it feels like you are dining/drinking at a bar but you can sit on either side and still receive that vibe. The coral chairs mixed with the other green colors and the bright room next door that almost feels as if it’s outside convey the coastal Italian feel.

Believe it or not, but the enormous menu will be hard to attack in one night. Sicilian Street Food, Salads, Vegetables, Pastas and Entrees fill up a menu of 30 items minus the sides! The best street food is the Stigghiola- lamb belly with green onions and lemon. Rolled up with a toothpick, this meat is tender yet crunchy on the outside and extremely flavorful. It’s a great way to wet your appetite and get the night started. While I did like the black puff rice component in the Marinated Clamari, it can easily be forgotten especially compared to the Tuna Crudo. This dish under “Firsts” is a whole lotta tuna in one bowl and is enough to go around for 3-4. I feel like I always get gypped on tuna appetizers and that everyone only gets one or two bites. Not here, this is just the right amount.

Sessanta is great because you can go big or go light. So many greens and veggies to choose from that you actually are dying to try, and they even serve delicious pickled veggies instead of a bread basket- cheers to no carbs (but just wait). The Greens & Chicory Salad may sound a bit sketchy and unclear, but it’s one of those salads you think I can totally make this at home but never will. It’s filled with spring vegetables such as green beans, carrots, snap peas, some other treasures and tossed in a memorable lemon honey vinaigrette.

Now onto the pasta and the big dishes. You’ll see down below and very obviously singled out in a big square box something titled Timballo Di Zanghi. It’s description is eggplant, anellitti, pasta pork sausage and that it serves 3-5 people. I don’t know if it’s the big square or the fact that it serves so many people, but I feel like I am always compelled to get these things. To be honest, I had no idea what it was and after seeing it and eating it, I’m still a little unsure, but I do know it was super fun and unique. It’s basically a round contraption outlined with eggplant and inside filled with ricotta cheese, these mini circular pastas that look like spaghetti o’s with layers of meat and topped with a ragu and parmesan cheese. Don’t you worry, you will not be digging into this noodle dome alone. Along with it comes table side service to dispense on each diners plate along with dressing the circular contraption with the ragu and some sauce. Was it great? It was good. I think it needs a little more tomato sauce and spice. Was it fun to eat? Hell yeah! Should you get it? Most likely, yes.

Somehow even after all that, dessert seemed to be my favorite part. I just can’t say no to a rhubarb crisp especially with a homemade blackberry ice cream. This crisp reminded me of my childhood at Camp Longhorn where we’d wait every week for Thursday to chow down on the homemade apple crisp. This crisp wins the gold and delights my heart just as much. Crunchy and soft granola bites with cinnamon and warm goodness. End it right guys. 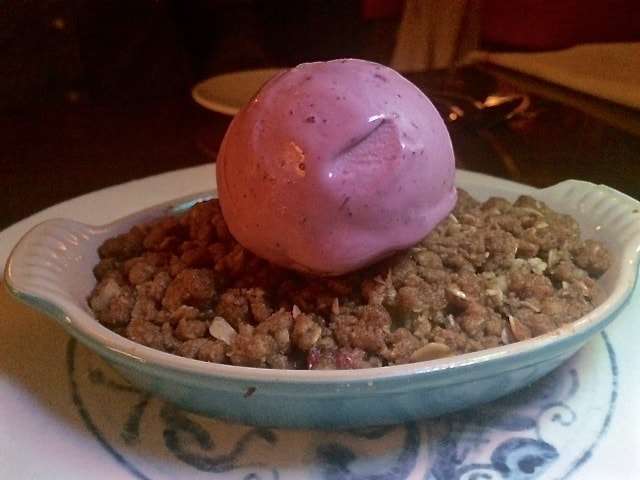