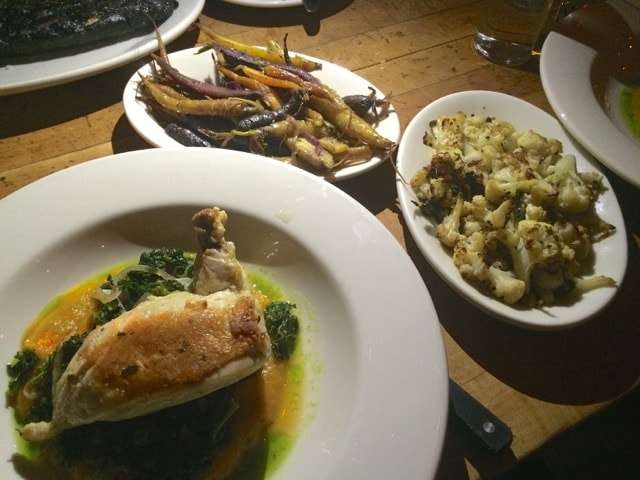 It’s freezing. You can’t breathe when you walk down the street and the wind is really ruining your game these days. Freemans, by a long shot, is probably the most cozy and best restaurant to dine at during the winter season. That being said it’s nice all year round but when you think about it, it’s winter in New York City almost six months a year, so there ya go. To enter into the restaurant, you stroll down a private drive called Freemans Alley right off Stanton Street in the Lower East Side. You walk upon a quaint house full of taxidermy, a giant staircase inside and multiple rooms that you can’t get over that they even all exist. It’s romantically lit by candlelight, perfect for date night and the menu is familiar and pleasurable to anyone. However, if you want to make sure to secure a table then plan for a minimum group of six because that’s the only amount they will accept for reservations.

The Hot Artichoke Dip with Crisp Bread might be synonymous with Freemans amongst your friends, but I’m here to tell you that the Lobster Gratin with buttery challah bread to sandwich the cheesy, crumbly goodness between. It’s basically like a bowl of mac ‘n cheese with bread crumbs- but with lobster instead of macaroni. Try and pretend you are on a paleo diet when you see this appetizer. For entrees, believe it or not but the Chicken Confit with Squash Puree and Kale is a chicken worth ordering. It tastes like a juicy rotisserie chicken with just the right amount of flavor and seasoning below it. My plate was legit empty with only the bone of the bird left. It’s more than worth ordering. This side of the menu isn’t offering anything rare that you have never heard of or “must” try, so going with this solid option is trustworthy and completely memorable.

Share a few sides for the table. The Cauliflower and colorful Carrots seal the deal. It’s like a home cooked meal in the Manhattan home of your dreams. Freemans’ recently celebrated its 10th anniversary and you’ll know why one you enter the alley. It’s magical, familiar, understandable and reliable. They’ve still got it.