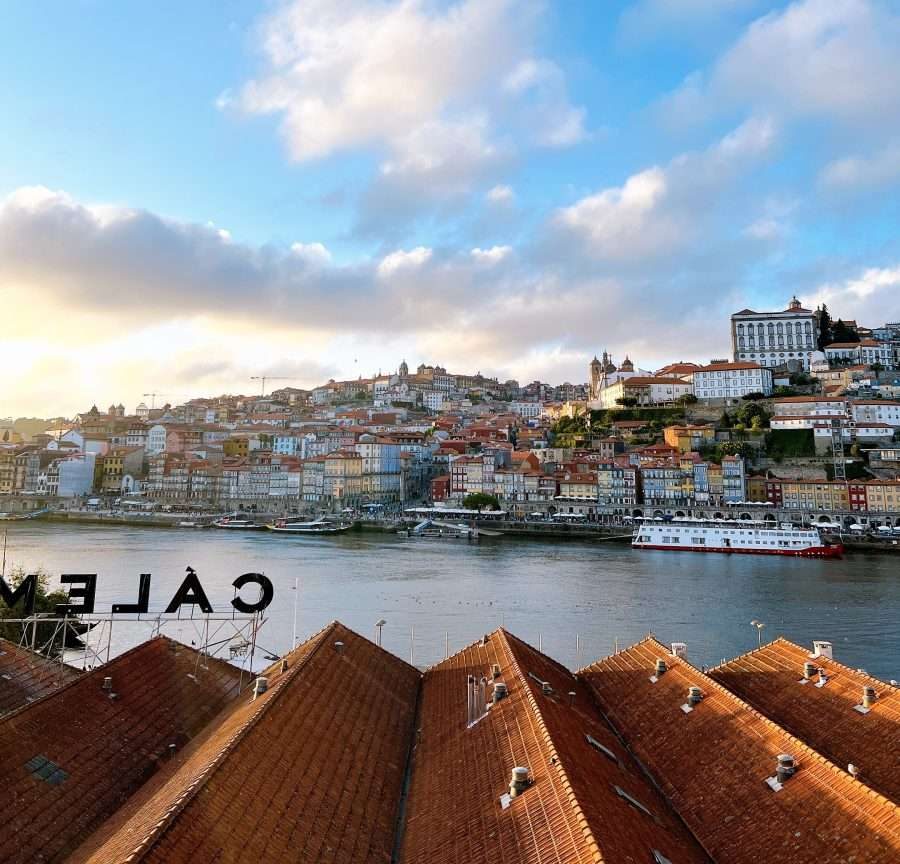 So, like I said in my Lisbon and Comporta guides, I planned my whole Portugal extravaganza around visiting Quinta de Comporta and flying into Lisbon to start. I had no idea how we were going to get to Porto if it were by train or renting a car which we did not want to do, but Erin assured me we’d figure it out when we got there. Luckily, after our fun-filled day in Sintra and Cascais with our new local friend and tour guide, Alessandro, we asked him if it was possible for him to come pick us up in Comporta (about an hour ++ from Lisbon) and drive us to Porto. He said it would be a long day for him but yes! He took us to all the spots along the way as we stopped in:

Mosteiro do Leitão is where Alessandro took us for lunch. It feels like Sunday church walking into this large dining room with open windows, large families eating bowls and bowls of food over the white table clothes, and then the open kitchen where you see the whole pigs being roasted and cut! Every table has these guys. I, of course, ordered Octopus, as a non-pork eater. This was the BIGGEST most tender, tentacle octopus portion I’ve ever seen. Covered in olive oil on a nice ceramic plate, the rest of the table got the pork that you are supposed to get which came with chips and a little lettuce salad. I liked the octopus, but the pork did not look like ham or bacon, so I really went for it and had a taste! Now, I know why everyone goes here and it truly is the most tender piece of meat I’ve ever had.

Our friend and tour guide Alessandro

The last place we visited before making it to Porto was Aveiro where you hop on a colorful boat and take a tour of the canals— kinda like Venice. Honestly, it was joyous but after being in the car that long already and loving the other places, I would’ve been fine skipping this and just getting straight to Porto.

I LOVED our hotel, Pestano Vintage Porto,  especially because it was directly in the middle of everything with incredible water views on the Douro River. Not to mention they had port wine and a fruit basket waiting in the room upon arrival and even chocolate truffle bedtime turn down service. Thank you very much! It was an ideal place to just enjoy the scenery and walk around to the surrounding areas in the Ribeira neighborhood where the famous train station called São Bento Railway Station with beautiful murals, restaurants, shops, all along the cobblestone streets. One of my favorite moments walking down these narrow streets was catching a local musician playing his guitar and singing for a crowd with such an incredible acoustic style voice while a local who lived in an apartment above him, leaned out the window playing in harmony with his own trumpet or violin (I cannot remember which right now haha!). Anyway, it brought tears to my eyes to see the collaboration between the two strangers and to feel the gift they gave the little crowd of us downstairs watching. It was truly one of the most powerful and beautiful things I’ve felt. While I had read about staying at Infante Sagres which is in a completely different direction and we passed by it while going to the famous library and I’m SO glad we didn’t stay over here.

Sardine Tour at Pinhais: Only a couple days after we booked our flights, I read an article in The New York Times titled, “ In Portugal, Taking a Dive Into Sardines.” This was truly the best day in July for me and thank goodness I opened this email, because as you know, I LOVE Tinned Fish and found out that this century-old, family run sardine factory started offering tours!!! I texted Erin immediately letting her know that I booked us a tour. I mean I have a tote bag from Fishwife that says Hot Girls Eat Tinned Fish that I receive compliments and laughs at on the reg! Just about a 15 min uber outside Porto, we stepped into what felt like a grown up Disneyland for me! The oh, so knowledgeable staff whirled us into the first part of the tour teaching us about salt, the geography and topography followed by a 10 minute video about the family which started the company in 1920 and has NOT changed the recipe or logo since they began.

Believe it or not, this video brought me to tears watching the father-daughter relationship and sweet connection and reminded me so much of what I have with my Dad and how much I love him. They really pumped some feelings into us learning about the family tradition and how much they value and take care of their employees. The fantastic and charismatic host/tour guide, then took us through the actual factory where we watched the 117 women cleaning, cutting, filling tins, all along the conveyor belt, and even how they wrap them with the labels perfectly never making any mistakes at the end of the turn. They wrap about 6-8 cans per minute which is 3,000 by the end of the day! We finished by learning how to wrap our own tins and then going up to the dining area where they had tins and bread for all of us to devour. While I didn’t think I’d cry at a sardine factory tour, I’ll never forget this experience and I even ended up becoming friends with another guy on the tour who was our age and a traveling chef cooking Palestinian food who used to work in NY as well. Man, I love the hospitality industry! If you finish early enough, head to the fish market called Matosinhos!

Contemporary Art Museum – I love art museums and mostly modern art. This museum which happened to offer a free entrance on Sunday’s housed the most beautiful outdoor gardens. Go for just the outside!

Livraria Lello is known on the street as the “Harry Potter Library.” It’s rumored that J.K. Rowling was inspired to write Harry Potter by visiting this library with the wild, spirally staircases. You might read that the lines build up to get in, but take this little secret that you can purchase a Priority ticket online that includes a Shakespeare book that will have you in the doors right away. It’s 16 euros and well worth it since you get to keep a momento!

Porto is famous for their intense pork sandwich called a Francesinha. Theres a whole street where each restaurant is “known” for them so if one is closed or busy, have no fear, you’ll still find one. Anyway, by the time we got to Porto, I was honestly kind of sick of eating out, but I think out of all the three cities, they had the best food! Where we chose to eat reminded me of small, quaint restaurants that you’d find in New York City, where you can tell the chefs are making everything from the heart, full of love, and creating an interesting menu that’s all their own.

Apego Restaurante – This woman owned restaurant with a tiny menu reminded me of King in New York City which is one of my all time favorite meals. When you have a menu this small, you just know whatever you order is going to be a knock out because they clearly have put so much though into each especially when the menu changes regularly. We started with sardines delicately placed atop a bed of basil and coconut milk broth with fresh beans. WOW! Then we had Squash Blossoms and Sea Bass with fig leaves and chard. The menu explains that the chef explores her Luso-French  connections in a menu of simple, organic, and exciting flavors, and to me, it’s JUST that in the tiny maybe only 6-7 table dining room.

Adega São Nicolau –This restaurant felt like we were eating inside a wine cellar and was our last feast of the trip! It’s almost like you could barely fit in the restaurant with an oval, wooden paneled ceiling lined with wine bottles. The menu has my heart all over it: Shellfish Rice, Grilled Sardines, Octopus Filets with Octopus Rice, an Oxtail Stew that looked awesome. Go for the Fried Alheira Sausage which are mini little crispy, buttery sandwiches to start. Way better than a standard bread basket. I know, I know, for someone who doesn’t eat pork I really got some in me this trip. We shared the whole sea bass with potatoes and cabbage followed by the not-so-sweet Almond Tartlet. That’s one thing I noticed in this country, the sweets are not that sugary and the “salty” foods are not that salty. It makes me think that this was a “me/America” issue instead of their seasoning issue because I truly thought everything needed more sugar and salt, and this country is known for their spices and flavorful food! I guess it’s just a different style!

Republica Cachorros – After Erin went with me for my sardine extravaganza (and let me eat her tin since she’s not a fan), we switched rolls and I went with her to try that wild, overly sauced, pork sandwich! It was such a wild last day and she dove into that Francesinha which is layers upon layers of beef, sausage, ham, salami, melted cheese, smothered on bread with a spicy sauce, and a fried egg. Yeah, I dunno but everyone talks about these things here. If you want something a little lighter you can go for the simpler hot dog style baguette which is a Cachorro Simple. The two places we wanted to go to but were closed due to the September holiday that Anthony Bourdain went to are: Gazela and Santiago da Praca right around the corner.

TapaBento – the hotel recommended as we had a hard time finding something on Sunday night—make sure you find a reservation for dinner this night of the week. It was fine with friendly service, but I’d say find something more exciting. While I loved walking across the Luís bridge to the other side of the river, it can be hard to find an Uber to come back if you are trying to make it to a dinner reservation. Skip the World of Wine (WOW) for a drink as that place feels like a huge compound and kind of gimmicky. Try grabbing a drink at a nicer hotel over there like The Yeatman or something or just walk across the river, look around and walk back 🙂

While I didn’t make it here, my cousin told me Gelataria Portuense is the best gelato place in town!