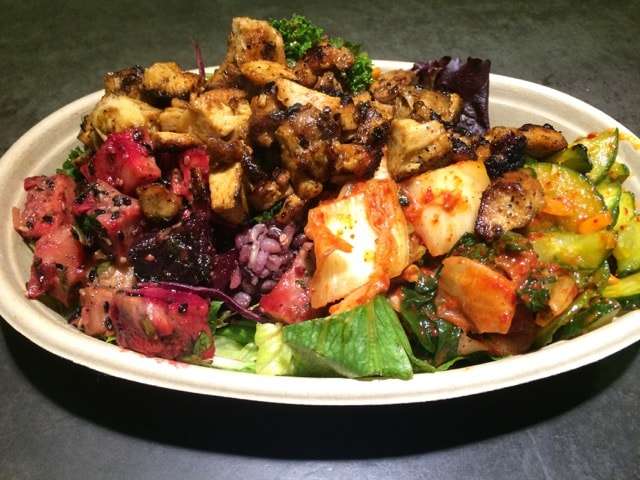 I don’t know what’s going on lately, but kimchi is hot, hot, hot. Ever since the Kimchi BBQ pop-up which is back this Thursday, Friday and Saturday (Feb 26-28), I have been craving this Korean style cabbage. Luckily, Korilla BBQ which is a Korean BBQ version of Chipotle and started as a food truck and now has a permanent shop on St. Mark’s and 3rd Ave. in the East Village. You can’t miss the orange and black tiger striped exterior. As you enter the assembly line, you know the drill: burrito, rice bowl, salad bowl or (somen) noodle bowl. I went halfsies on the salad and purple rice bowl (bacon kimchi fried rice is also a rice option). The purple rice adds a grainy and hearty texture to the mix. Then you have your choice of protein: Kalbi Marinated Steak, Spicy BBQ Pork, Gochujuang Marinated Chicken and Baked Tofu. The chicken is much better than the chicken at Chipotle. Not they are even seasoned similarly but it’s just more satisfying, flavorful and tender.

Next up is the kimchi department. Bok Choy, Bean Sprouts, Kale, Sweets & Beets, Summer Kimchi, Red Kimchi, Daikon Kimchi and Cucumber Kimchi. Seriously how on earth can you pick? Well, at least they let you sample them. I loved the Kale which had a spicy kick, Sweets & Beets , although the beets were much better than the sweet potatoes, cucumber kimchi and red kimchi. As if that’s not enough you pick a sauce next. The Hot & Spicy is similar to Cholula Hot Sauce, but honestly, all of the veggies and meats are marinated and pack enough flavor that you can do without a sauce. The scoops of each ingredient are pretty large, so you’ll definitely be extremely full after one of these guys. It’s so nice to have an authentic place like this that’s quick, affordable and pretty healthy when you think about it. I love the abundant amount of veggie options which assures you that you can try several different combinations each time you go back. Sayonara, Chipotle heads. Choose Korilla BBQ.