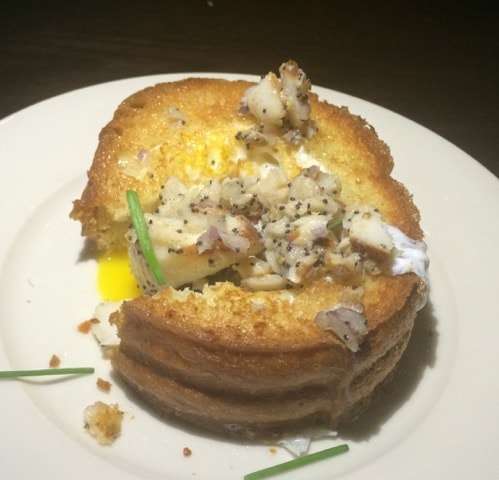 Zahav, an Israeli and Middle Eastern restaurant in Philly, is one of the best meals I’ve had all year. The small plates menu couldn’t be more perfect for groups or out of towners looking to try everything and the deal is such a steal. They have a Taste of Zahav called Tayim that is $42 per person for the entire party and you get Salatim & Hummus with Laffa for the table and each person gets their choice of 2 Mezze, one Al Ha’esh and one Dessert. There are two rooms, one with a bar that is more social and open and one of to the side that is a bit more private. Our table for 6 sat in the private room with a “half-moon” shaped booth and a canopy with a nice “curtain” hanging above that made me feel like I was in the Middle East- and dining like royalty, of course.

In the prix-fixe meal, you start off with a heavenly vegetable and hummus selection and the fluffiest pita bread you’ve ever seen. The beets and spicy green beans are unbelievable and as we were devouring these bowls of goodness. At this point, I already thought how I could munch on this all night and not even need anything else but constant refills of this. It truly tastes as fertile and fresh as the produce in Israel. Now, I’m not going to warn you to save room for the rest of the courses and not fill up on bread, because you need to experience these tastes over and over again and just figure out how to make more room in your stomach as the night goes on. The Fried Cauliflower is the best cauliflower I’ve ever had. Each of the heads are crisped just the right amount and the bowl is painted with a dill, yogurt sauce meant for dipping. You might want to order a couple of these. One of the most fun and unique dishes I’ve seen in a while is the House Smoked Sable on challah with a fried egg. This buttery bread concoction would make the best late night snack ever. In fact, I bet Michael Solomonov could open up a small place in the Lower East Side just serving these and make bank.I rather wait in line for this than a Cronut any day. 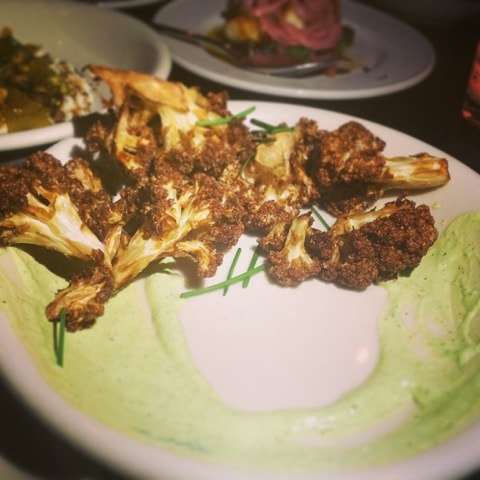 Fried Cauliflower
The Crispy Haloumi cheese with dates, pickled onion, walnuts and urfa is also a show stopper. The branzino  with celery root, apples, and tzatziki is also a dish to throw in there.I found that I liked the seafood and vegetable dishes more than the meat. The eggplant over lentils is also one I wouldn’t miss.

What makes a restaurant the most fun and enjoyable is who you are with and when you are sharing amazing food like this with special people, the food automatically increases it’s taste and gets better. That’s exactly how Zahav is. You are sitting there expecting to have a good time, sharing and breaking bread with your friends while the food comes out a stream and almost feels never ending. The portions are designed perfectly to allow you to keep wanting more and not feeling overly full or too heavy. Although let’s be real, you will definitely be full after the prix-fixe. However, there was no avoiding the Honey Cake Bread Pudding dessert with green apple frozen yogurt, apple compote and golden raisins, unless you’re a psycho. Warm, sweet and just the best way to end an extraordinary meal.

I would take a bus to Philly just for the night to eat dinner at Zahav and then come back. It’s totally worth it and dreamy. Stay tuned for the cauliflower recipe as well.