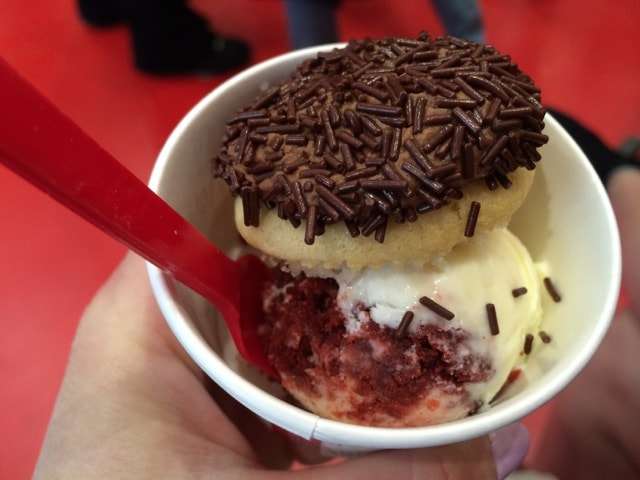 Nothing made me happier than the day I found out New York was getting a Sprinkles Ice Cream shop. Now I didn’t have to fly to LA and beg my friends to drive me there immediately. The 24-hour cupcake ATM might have caused you to raise an eyebrow, but an ice cream shop where you can get cupcakes, cookies and brownies stuffed into your cupcake flavored ice creams is literally a dream come true for me, a cookie monster/ice cream abuser. 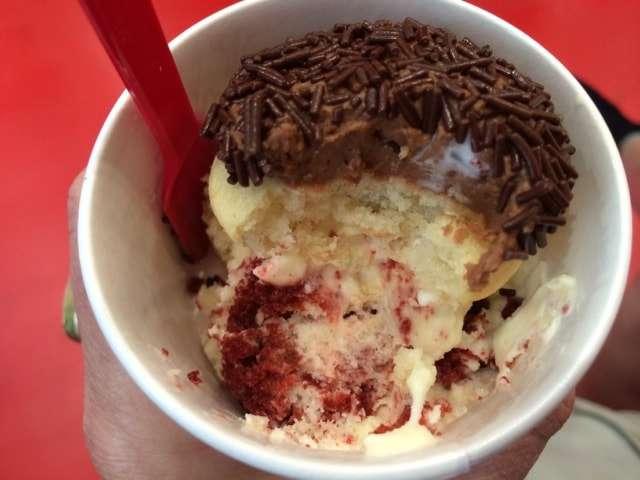 I made the mistake of waiting in line at the actual cupcake shop before I got to the front and they said an entire shop dedicated to their ice cream was just next door. Rookie move, I know. Once you enter the magical place, it’s only uphill from here. I remember screaming a new flavor of ice cream out loud every other second to my friend as I was perusing through the menu which is also laid across the entire wall. How can they have so many flavors that sound like you will die if you can’t have them all at once? Sadly, they were out of peanut butter cups when I went, but luckily I was more than happy and almost high off my choice. I got the Red Velvet Cream Cheese Ice Cream smashed between a Vanilla Cupcake top and bottom with Chocolate icing, creating what they call a Sprinkles Sundae. Other ice cream flavors include: Cap’n Crunch, Cherry Vanilla, Coffee Fudge Almond, Salty Caramel, Blood Orange Sorbet, Pistachio, etc.

One really cool thing, is that they have a mini version so if you aren’t ready to dedicate you’re entire afternoon to a jumbo cupcake and giant scoop of ice cream, you can get a smaller portion called Mini Sprinkles Sundae where they use a mini cupcake and reduced size of ice cream. It’s super cute and extremely satisfying. Eating a cupcake with a spoon is also liberating and you can control getting equal amounts of icing and cake into your mouth at once. I adored the ice cream and I loved the cupcake even more! I also loved that the cupcake was a little cold. It’s like a better version of ice cream cake because the icing is still fluffy and the cake fresh as can be. This gem in a cup is one of the best desserts I’ve eaten in a while. I absolutely am into it and dream about the next combination I will attack. Cupcake Ice Cream Sundae for the win!