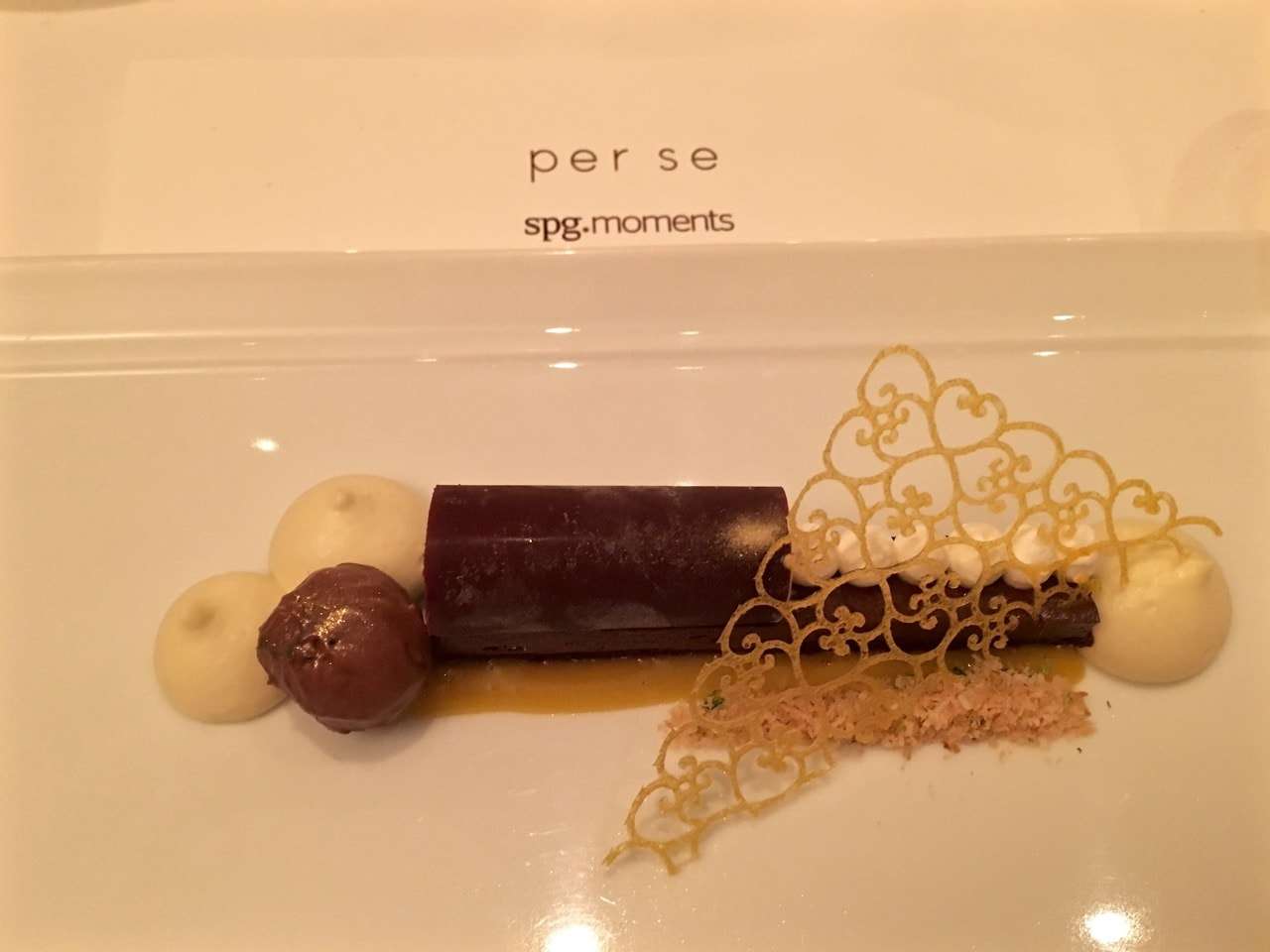 New Yorkers are all about having the best experiences, the best slice of pizza, drinking rose on the best rooftop bar, and essentially getting an invite to any of the most exclusive or secret events that the city buzzes with nightly. Whether you have the most memorable night eating late night chicken tenders with the band members of Capital Cities (true story) or buying Aziz Ansari a cocktail when you bump into him at the Top of the Standard, I think it’s safe to say that New York truly does offer once in a lifetime experiences that never seem to run out.

One of these memorable experiences for me was most recently at Per Se. Yes, the Per Se at Time Warner Center with Chef Thomas Keller in the flesh. This was able to happen due to Starwood’s SPG Moments which is a program that members can redeem Starpoints for curated and special events that money can’t buy across music, sports, culture and culinary. The way I see it is if you are deciding between a free night at a hotel with your points OR a private dinner with one of the most famous chefs in the country that includes: a tour of the infamous and super serious kitchen, an intimate 5 course meal with wine pairings, and the chance to watch TK break down a whole duck in the private dining room before your eyes, well.. YOU CHOOSE SPG MOMENTS. This is a great way to use your points and gain access to something that regular Per Se customers cannot partake in on a regular evening. 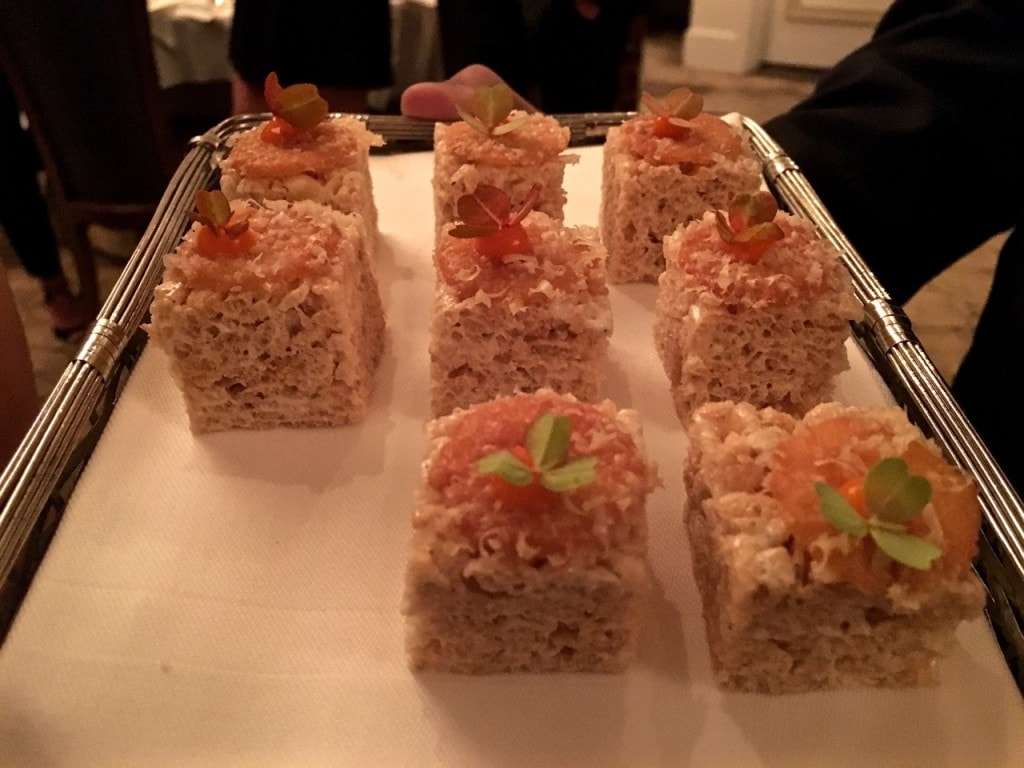 Savory Rice Krispie
So let’s get chatting about the night already. Upon arrival, a champagne glass magically appeared in right hand while my left hand was immediately reaching for a savory Rice Krispy treat hor dourve with a Japanese spice called togarashi. Now I rarely see this marshmallow packed guy at a restaurant and seeing it at a fine dining establishment really tickled me pink. His other famous bit was a coronet ice cream cone with salmon tartar packed in.

When Chef Thomas Keller gently grabbed me by the arm (in a fatherly way) and led me into the kitchen, I had no idea what I was in for. I’ve spent many hours in New York City restaurant kitchens, and I will say I have NEVER seen anything quite like this. It was the most quiet, patient, and cooperative kitchen that probably ever existed. It seemed like an operating room. No yelling chefs, no small corners where you could get bopped in the head with a running chef, and just enough space to create the artwork that is being delivered to guests’ blank canvases. There’s one kitchen for the main dining room and one for the private dining room which is where our food was prepared. 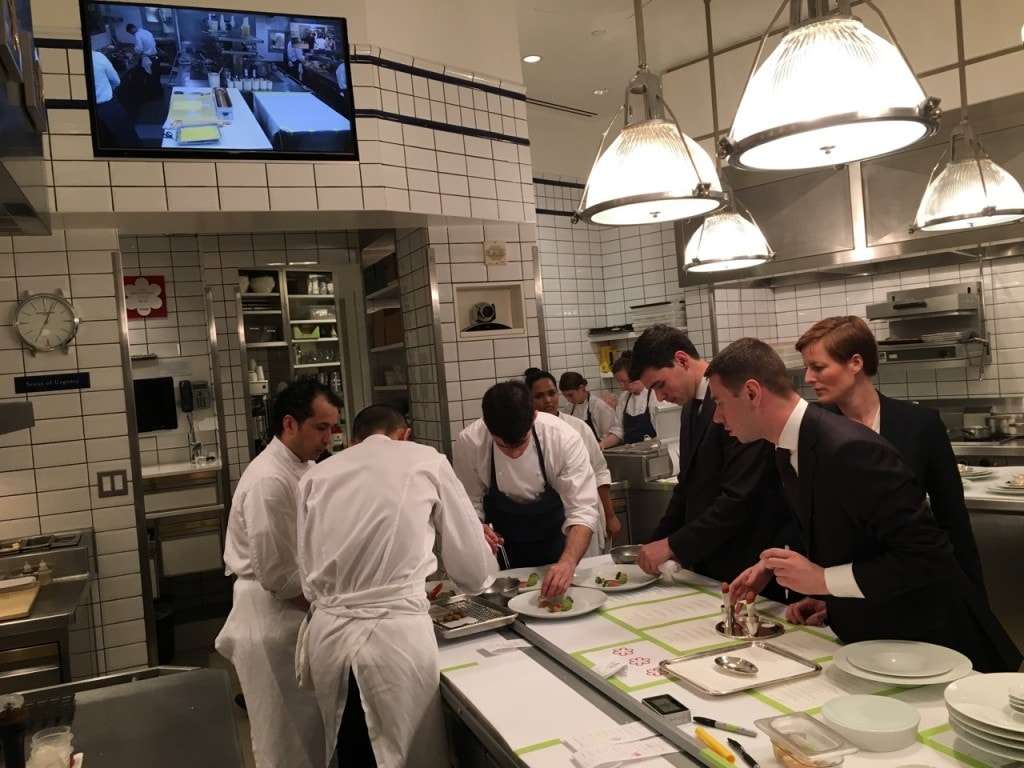 Kitchen Hard at Work
The first-course was Thomas’ (I feel like I can call him by his first name now) signature dish: Oysters and Pearls which is oysters and caviar. This cup of richness is quite rich and a great introduction into the meal. The bread basket was gorgeous which I would have expected. The pretzel roll plays a nod to the New York City cuisine and the server came by around several times throughout the meal offering us seconds, thirds, fourths which were hard to resist because you want to try each kid of carb, right? The Waldorf Salad did nothing for me, but it was the sauce on the Dover Sole that struck and should immediately be bottled and sold online. The sole was prepared in an almost cylindrical shape with a great ramp top “panade” coating bathing marvelously in the brown butter emulsion. The next course was definitely the best and really the menu increased satisfaction with each course. At the last savory dish here, Chef made another appearance and showed us with his bare hands how to break down a duck, the bones, and even extrude the blood to then use to make the sauce. I always say duck is one of the hardest dishes to make not because of tried but because I’ve had so many tough ducks in the city so I just figured it was an animal I didn’t agree with. However, the duck at Per Se is one of the best pieces of duck I’ve ever had (Juni has a fabulous one as well). It was tender, cut perfectly without breaking my arm and went down nicely. 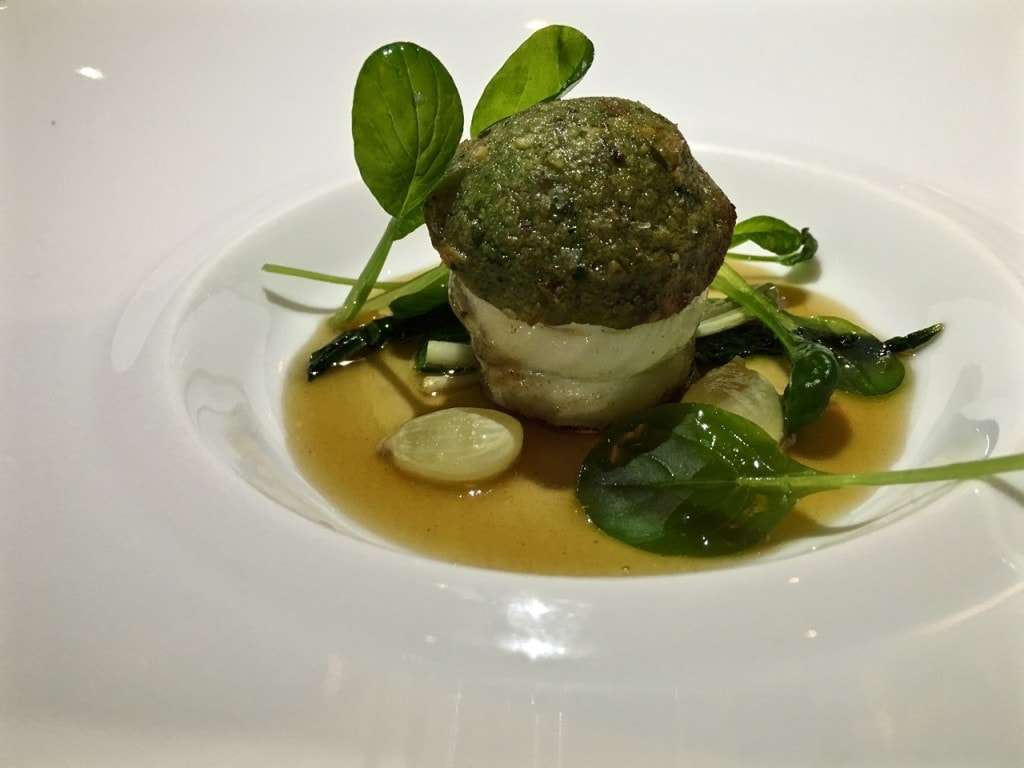 Sole
Dessert time basically enlisted a parade. First a block of Kunik cheese from Nettle Wood Farms paired with a Muscat grape tart followed by a Toasted Coconut Mousseline of Devil’s food cake and dulce de leche ice cream where chef learned to make in France. It didn’t stop here though. Dessert stands leaped onto the table full of chocolates, macarons, caramels, and probably any other dessert bites you can think of.

With the controversy of Per Se losing stars in Pete Well’s most recent review in The New York Times, I wasn’t sure what to expect. Was the food just old news now and had the service really lost its pep? Chef Keller said something at the very beginning of the meal that I have always believed and it in turn really defined the whole evening. “It’s not where your reservations are, it’s who they are with.” Let me elaborate. Per Se was not the best meal I’ve ever had, and to be honest, I don’t think any restaurant serving a tasting menu priced at $325 will ever be my favorite meal because that’s not my style. However, I had one of the best nights out in New York City because of the following: the amazing hospitality and service at Per Se, watching Thomas Keller enjoy every moment while showing us his “home” and sharing his personal stories from culinary school and kitchens, and meeting a wonderful table full of strangers who are as passionate about restaurants as I am. This is what Per Se and SPG Moments is all about. Giving you an experience you will truly never forget and reminding you why New York’s dining scene is so special. 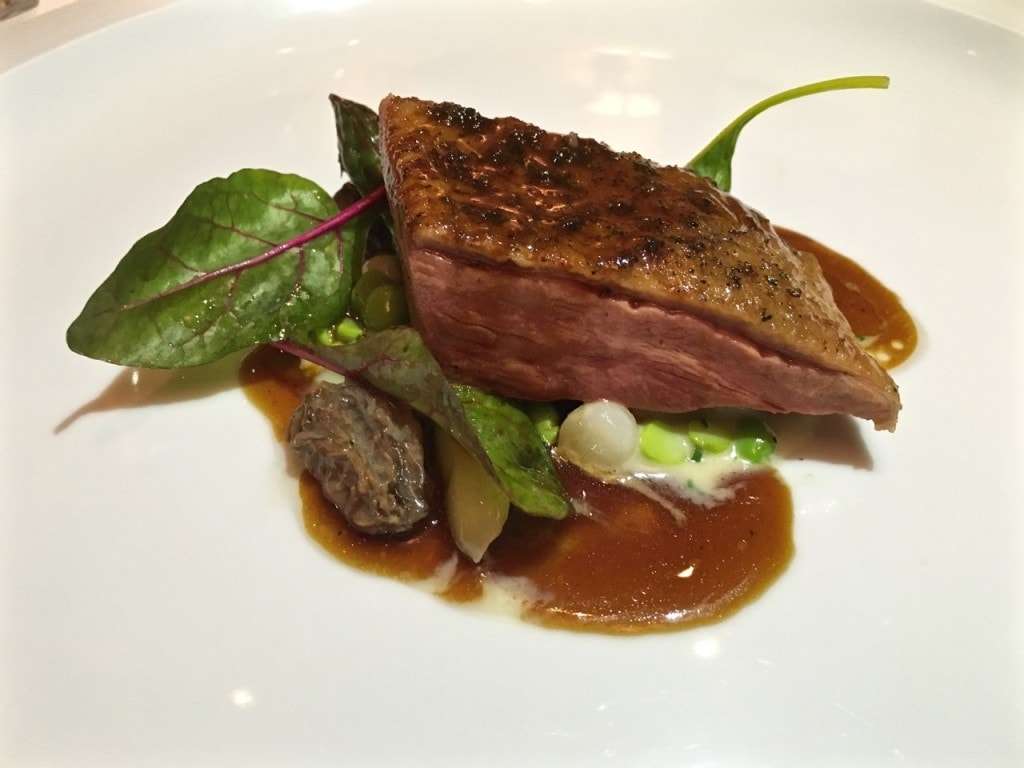 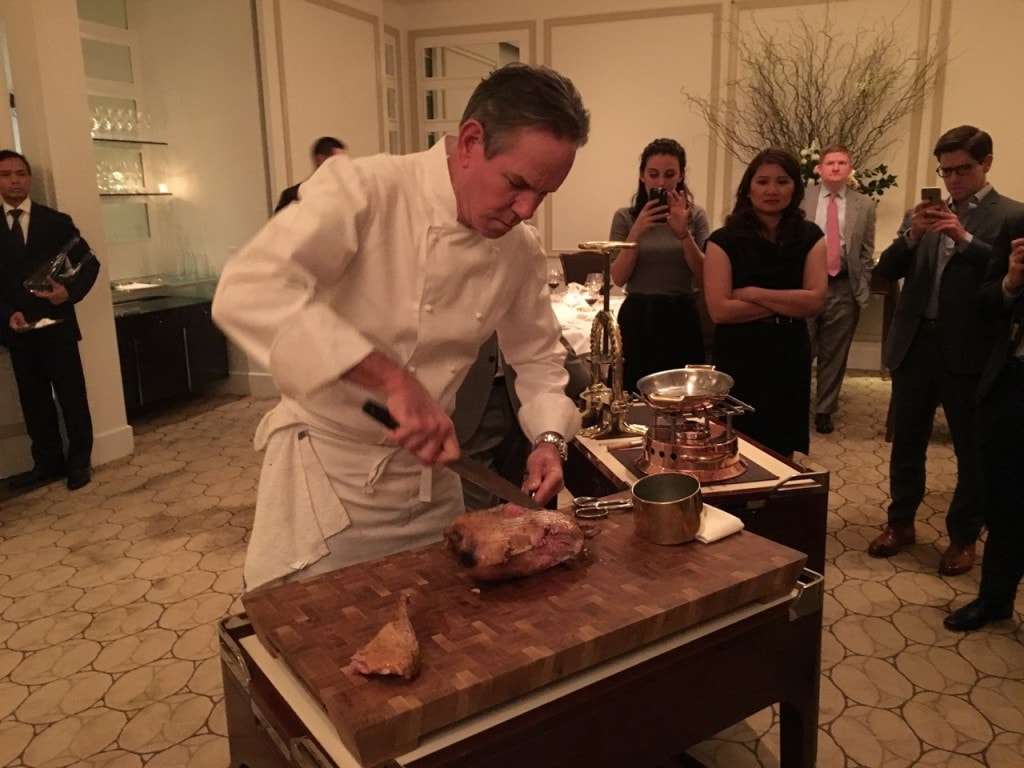