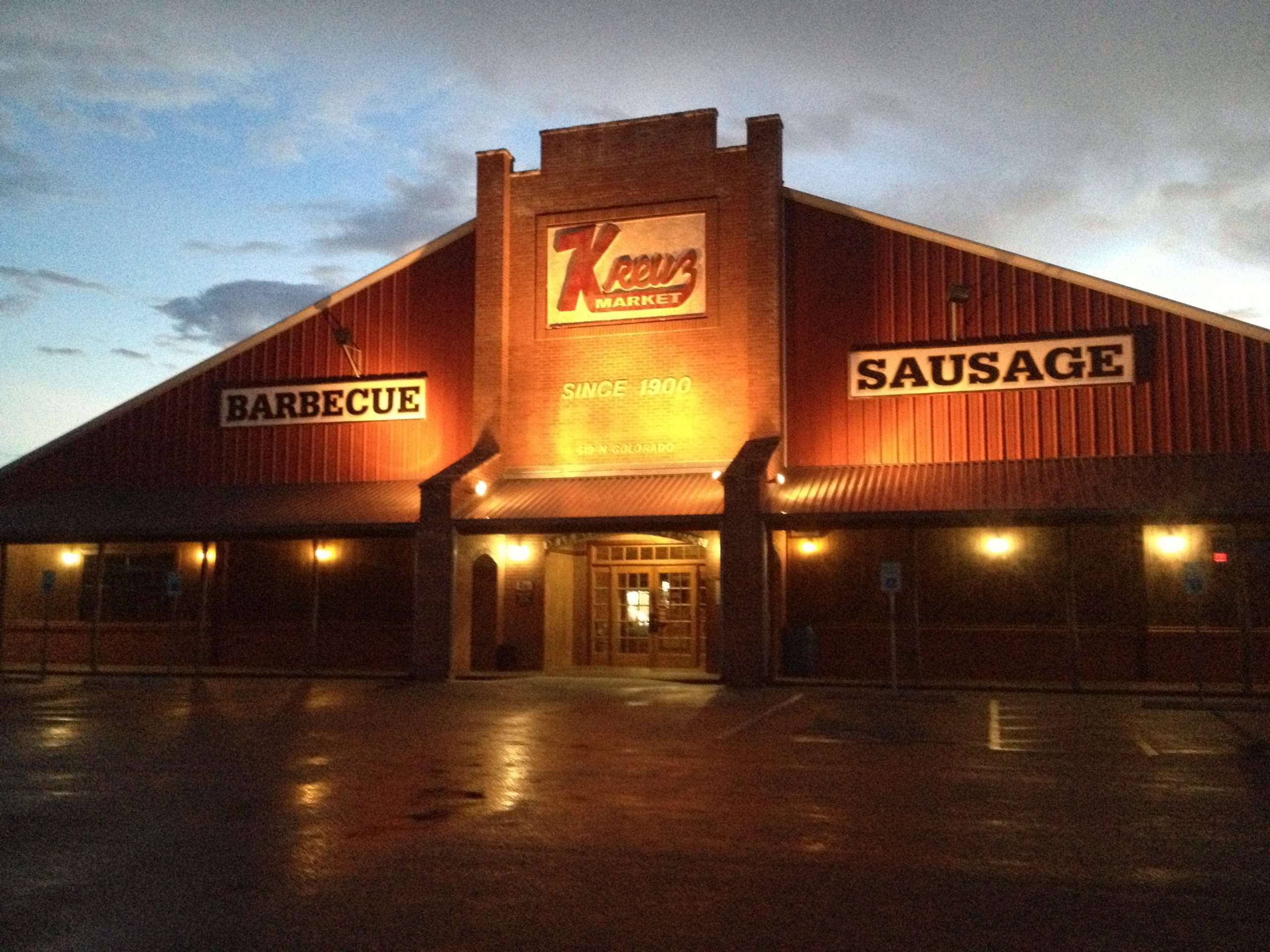 Kreuz Market is the definition of my food childhood. My mom’s grandparents immigrated from Poland to the small town of Lockhart, Texas, and raised their 4 children here where everyone knew everyone. Lockhart is just about a 30-40 minute drive from Austin, and known as having the best 3 BBQ restaurants just a few feet/miles from one another (or at least that’s what I grew up thinking or was brainwashed to think). Making the trip to Lockhart from Houston a few times a year to see family and cousins was always centered around getting BBQ at Kreuz Market and Black’s BBQ. At Kreuz, however, you had to use your hands, eat off butcher paper and can’t find BBQ sauce anywhere. At Black’s BBQ a bit smaller, you can choose from an array of sides, the best cobbler and the best BBQ chicken WITH BBQ sauce and silverware. 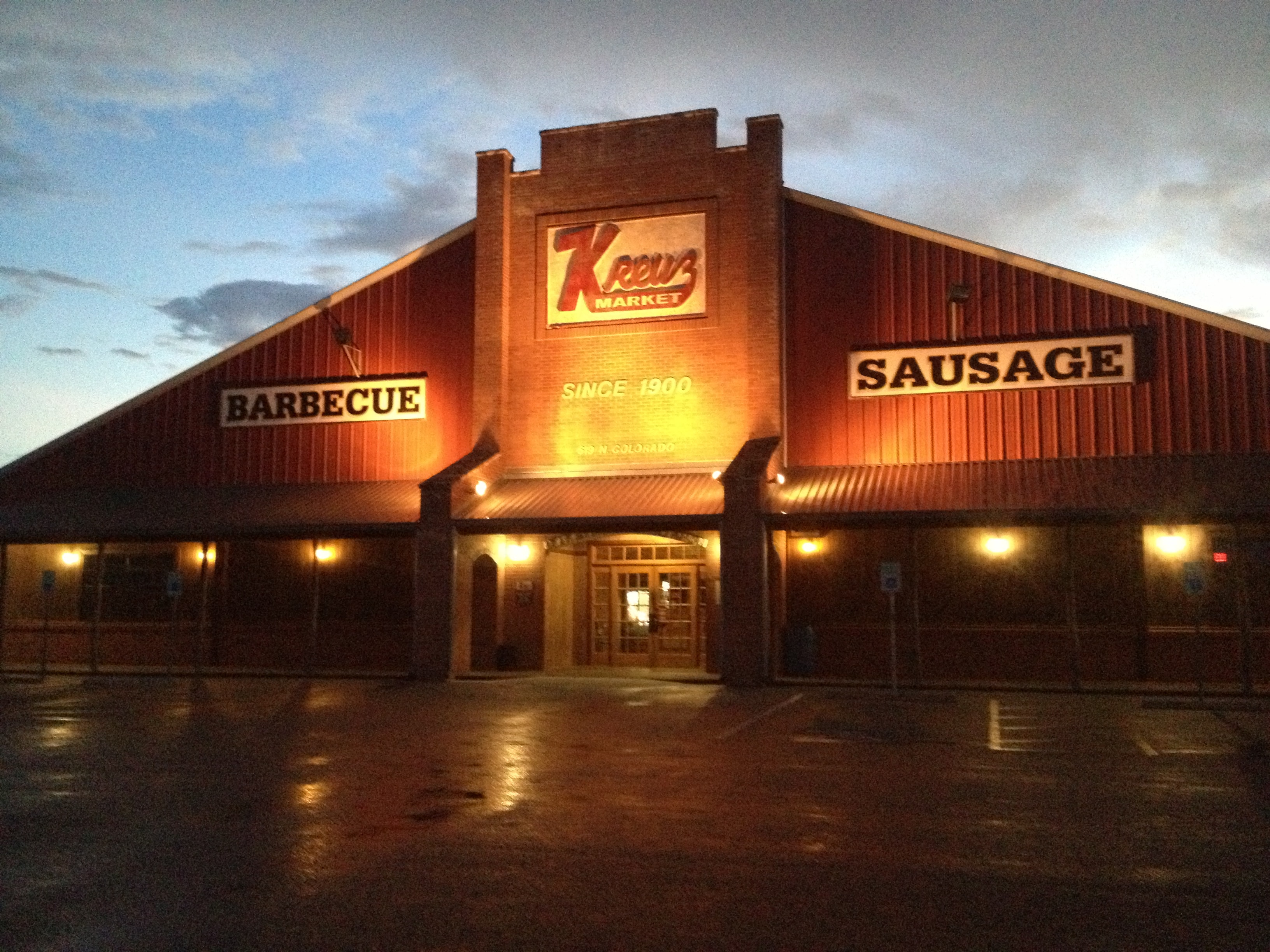 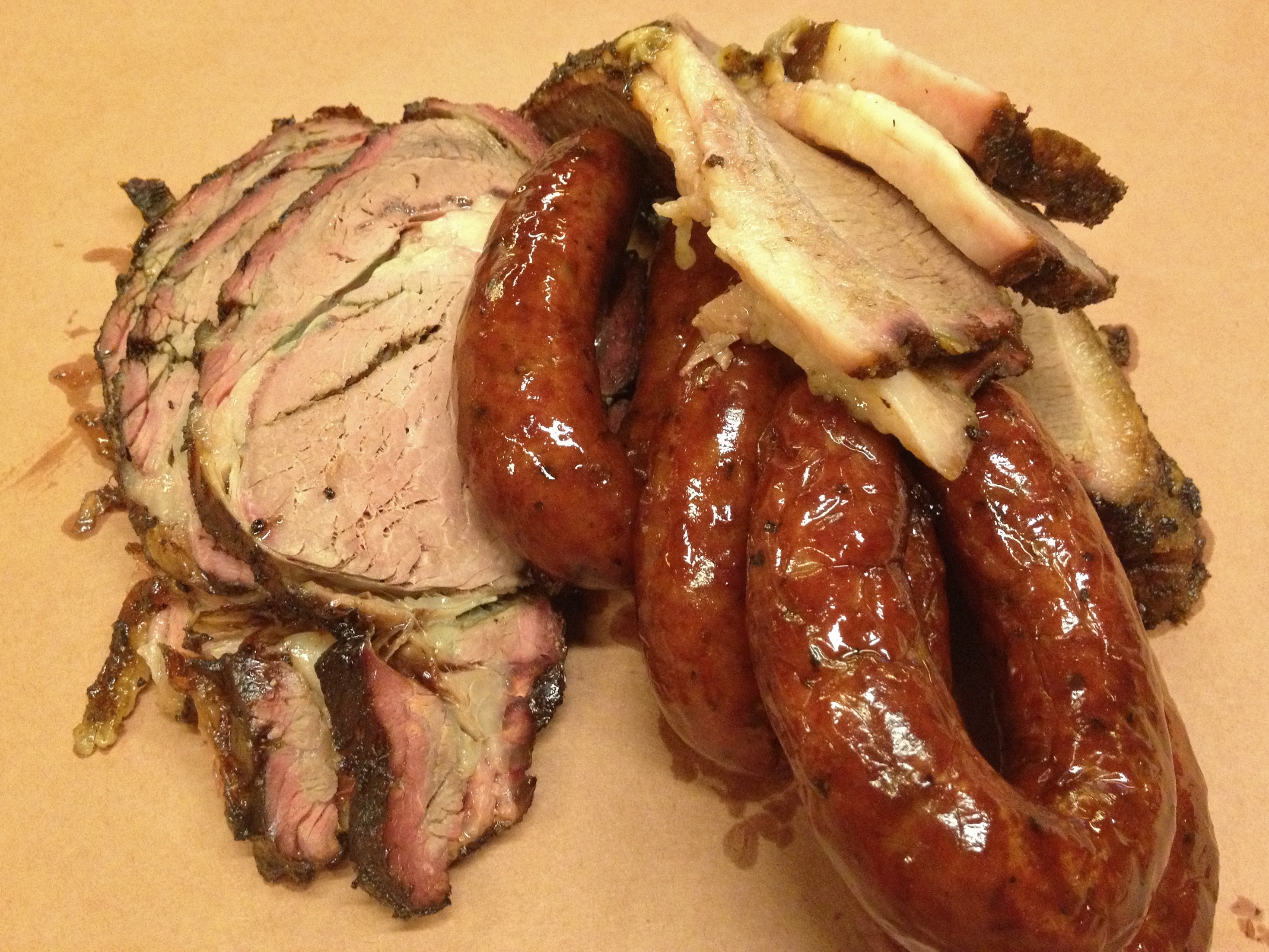 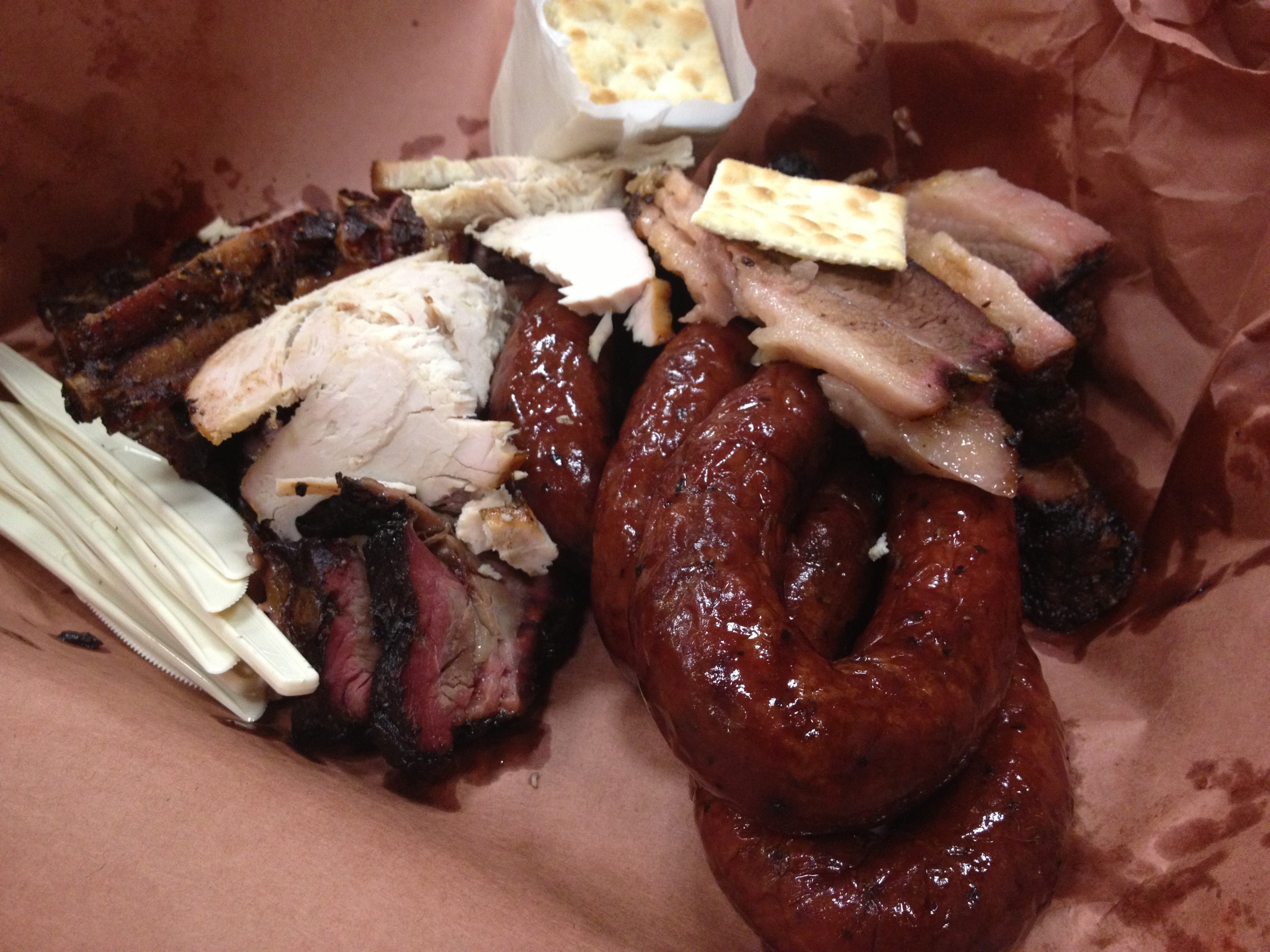 Kreuz is the real deal. The space almost looks like a huge concert hall or barn as it’s so large, located just off the highway and filled with enormous tables (they redid the space recently). The BBQ pit is bigger than anyone’s NYC apartment and you can see the fire lit at the base. You order your meat by the slice, pound, or basically whatever you want. The slabs are then weighed for price, thrown on a piece of butcher paper, wrapped up and then you take it inside, find a table and start attacking. Locals fill the tables and all I could think of is what a great photo this entire scene would make. Maybe I’ve been in New York too long? However, these are somewhat my roots and Texas culture because lets face it Texas is all about BBQ, Football, the Lake and Tex-Mex. 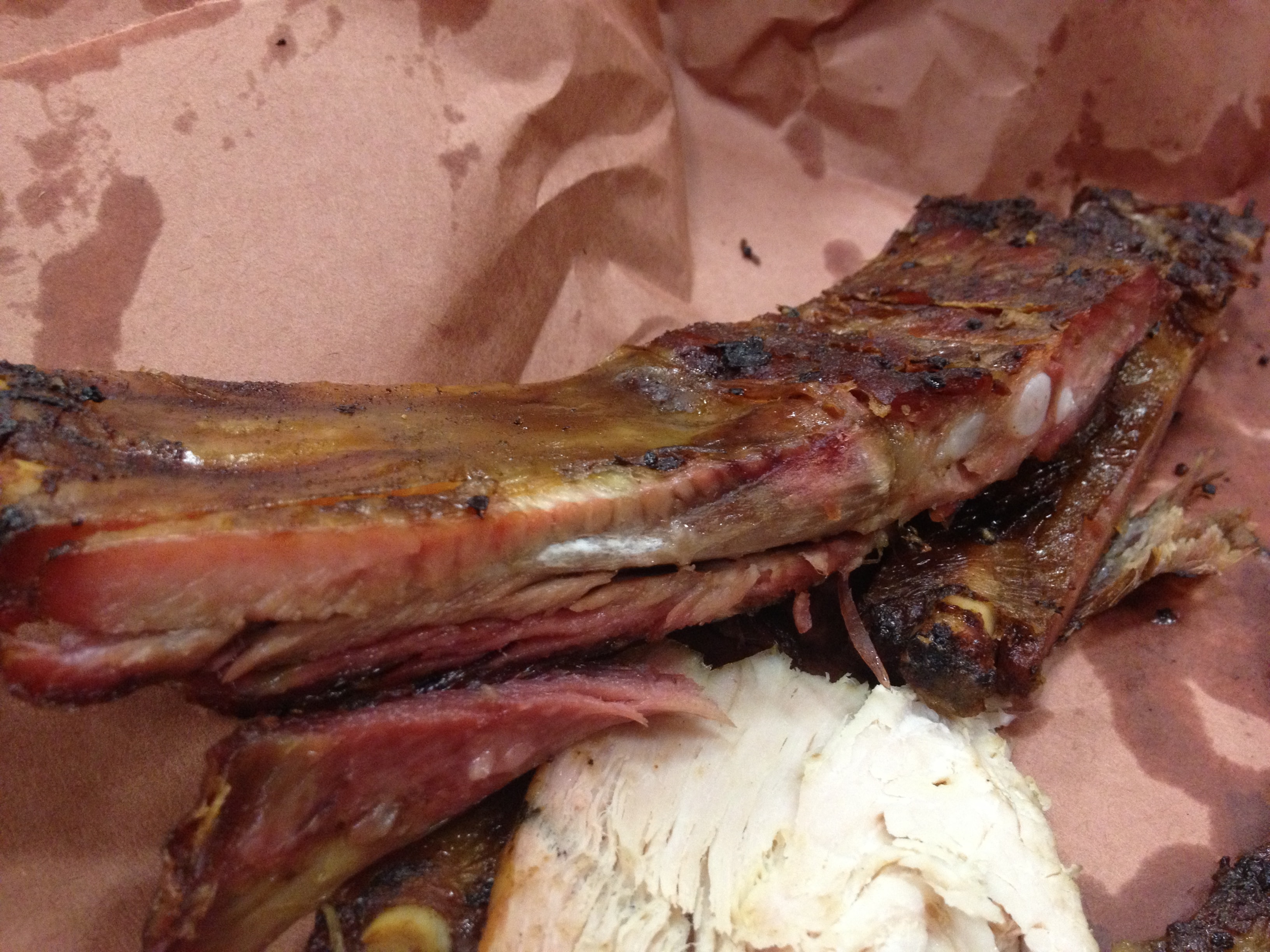 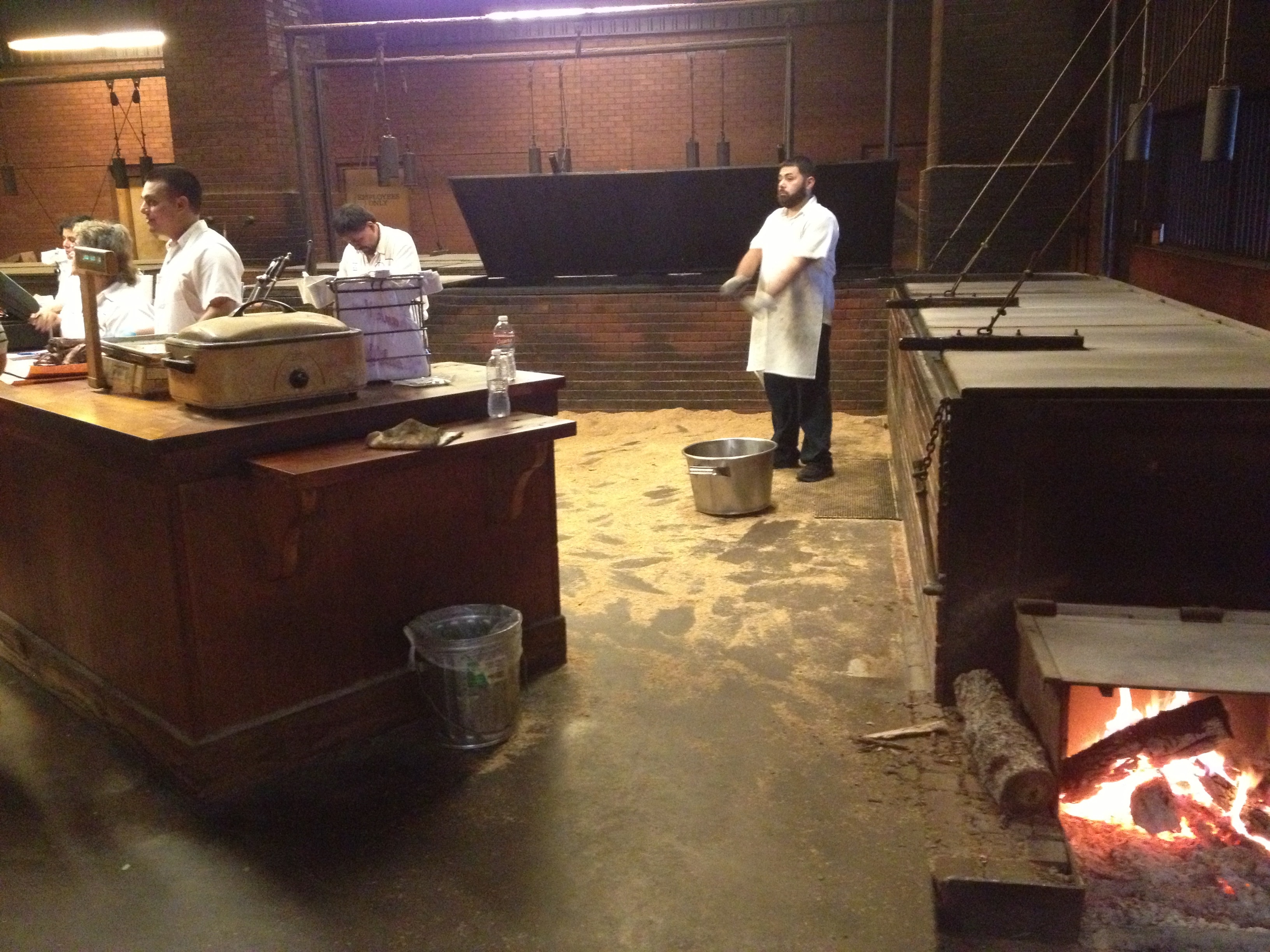 After eating at Brisket Town, Mighty Quinn’s and Dinosaur BBQ all summer, I was a little nervous to go back and try Kreuz because I was afraid it wasn’t going to be as good as the new New York BBQ I’ve grown to love. Boy was I relieved that I was proved wrong. The brisket, not as thick cut as the meat at Brisket Town, has the most amazing smoky flavor and thin layer of bark surrounding each piece (Brisket Town has better burnt ends). The brisket here is a thinner/medium cut, a little juicy, not too fatty but still some and overflowing with flavor. Boy does it taste like home. Now y’all listen up, they close around 8 p.m. and can run out of the good ribs by then. Make sure to ask for some big ones- they might have a few left if you ask. Thin ones never have good enough meat. They do not fall off the bone like my experience at Franklin BBQ (which is the best rib I’ve ever had), but it’s still extremely tasty meat and not dry. The turkey is standard but hard to eat as you don’t want to waste space in your stomach for this when you can have ribs and brisket. My dad loves the spicy jalapeño sausage but I never try it… Another part of the experience is that no one really looks up while scarfing down this authentic ‘cue. Maybe about half way to reach for another slice of meat but everyone is concentrating so hard on one hand movement which is from the parchment paper to the mouth. Oh, and don’t forget to wash it down with a bottle of Big Red.

Our only trick and secret here is that our sweet cousin always stops at Black’s BBQ on her way to meet us and brings us sauce and their smoked chicken that we hide on our table to contribute to our feast. I hope she never reads this because then she might not be our secret source anymore and she already makes fun of us. Sometimes you just need a little sauce OK? The peach cobbler at Black’s is also stellar and unbeatable. You need this with a scoop of Blue Bell vanilla ice cream to push you over the top. The bottom, sugary crust mixed with the peaches and cinnamon sauce is gooey, sweet and my favorite. This is what home tastes like.

Oh and yes, my dad drove back to Houston with a cooler full of leftovers which I have no doubt in my mind he will eat as soon as he gets home before unloading the luggage from the car.

***For New Yorker’s, if you haven’t been to Hill Country in Chelsea yet (which would be hard to believe), this is the closest experience you can get to Kreuz’s. My amazing cousin opened this restaurant modeling it after Kreuz’s where our family gathered together for so many years. I actually think his moist brisket is better than Kreuz’s sometimes. You get the same parchment paper, slices of meat by the pound, huge BBQ hall feel plus live music downstairs and old photos of Lockhart  and Texas Monthly Magazine covers on the walls. Plus he serves BBQ sauce and silverware. 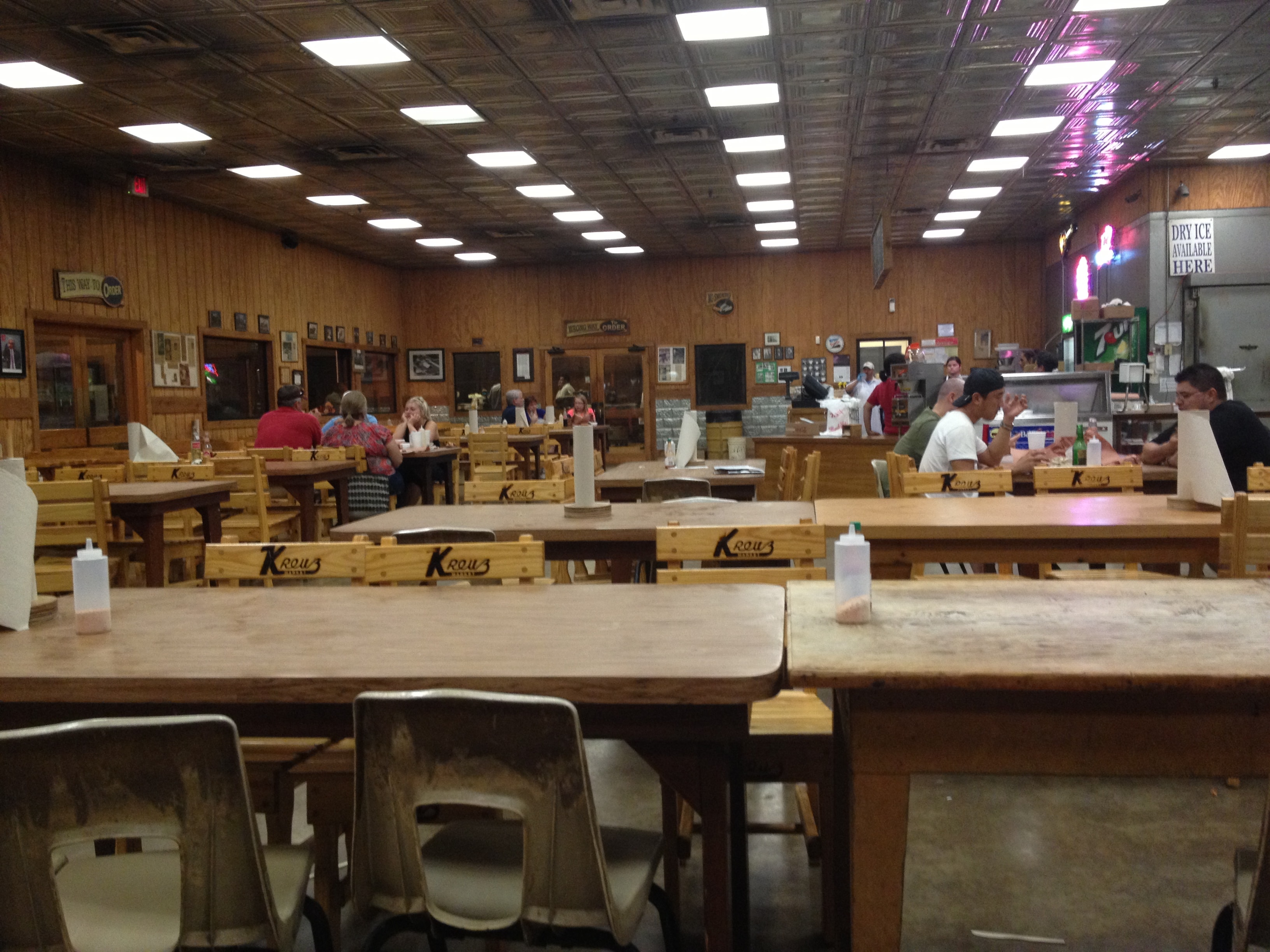