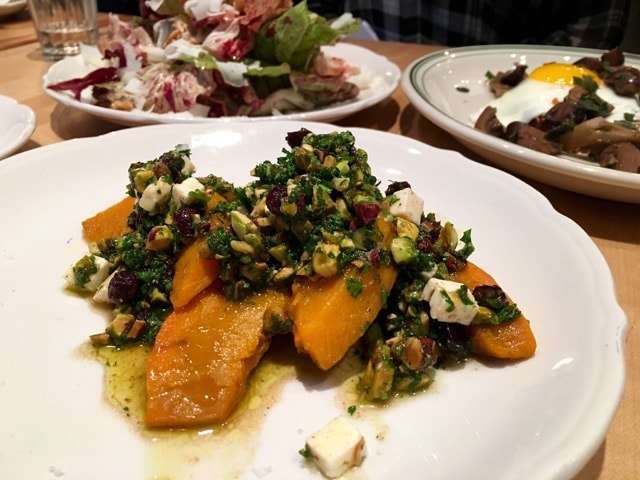 The New York Times named Houseman’s Chicken one of the best dishes of 2015 while social media and everyone else called out its burger multiple times. I went in for lunch so unfortunately, I cannot report about the chicken, but what I do have to say is that everything else has been overlooked. While the menu does change regularly, what about addressing all of their fresh vegetable appetizers that score home runs? Squash with sumac, pistachios, feta, and currants light up the plate with color and your stomach with hearty flavors. The Chicken Soup reminds me of a Jewish Deli like Mile End or Katz’s as it really hits the heart. The chef’s creativity shines through the menu before your food even arrives. Everything you could possibly crave is on there in some way or other and in a form that isn’t too repetitive or something you’ve seen. No kale salad, no avocado toast, no quinoa bowl. So many other exciting things that will have you studying the menu and rereading. 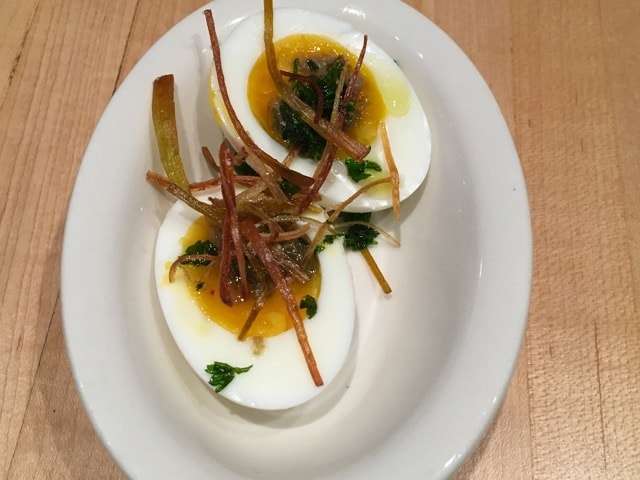 The Dressed Eggs are a great way to whet the palate. A little creamy yolk surrounded by a tougher egg white, makes a great snack. The Soft Goat Cheese toast with a fried egg and wholesome mushrooms dancing around the main attraction is a nice lunch option should you have skipped eggs for breakfast that day. Now, I’ve indulged in an amazing French Onion Soup Burger at The Little Prince which there is no other burger or copy like it, but I have never seen a French Onion Soup Sandwich. I have no idea why no one has done this before? The crispy, buttery bread sandwiches a large amount of cheese onions and mustard seeds. It’s like a grilled cheese on steroids for the day you just don’t want that American cheese deli style sandwich. It warms the soul, but I do think to heighten the flavors, they should provide a side of French onion soup liquid side for dipping to allow that more soggy and soupy taste. Oh, and those thick pickles served on the side pays another tribute to the deli, which I love. As I’ve referenced the deli twice now, I want to be clear that Houseman in no way looks or feels like a deli. It’s the classic dishes and nostalgic feelings that the food creates that pays a nod. The natural lighting and bright atmosphere also helps, and the bar seating makes a great option for dining solo or walking in with a date. 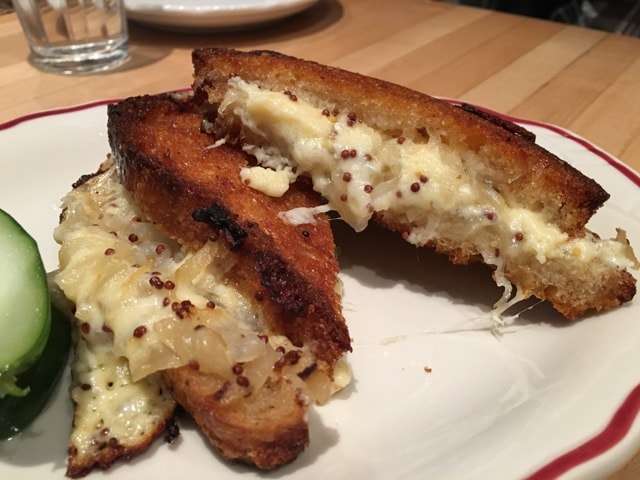 French Onion Soup Sandwich
The burger might be one of the cutest little guys I’ve seen. Two well-done patties served under a soft, squishy, white bun is all it needs to be resting on. If you like a more fast food like Shake Shake burger, this is the one for you. The fries are another story: medium-cut and salty as can be. Fire these guys off, and they’ll instantly disappear. After all these shareable bites have been consumed, look no further than the dessert menu here.

The Malt Ice Cream with chocolate fudge melted over soft, yet crunchy brown butter croutons made my heart flutter. Sweet enough with chocolate is the game, and Houseman schools it.