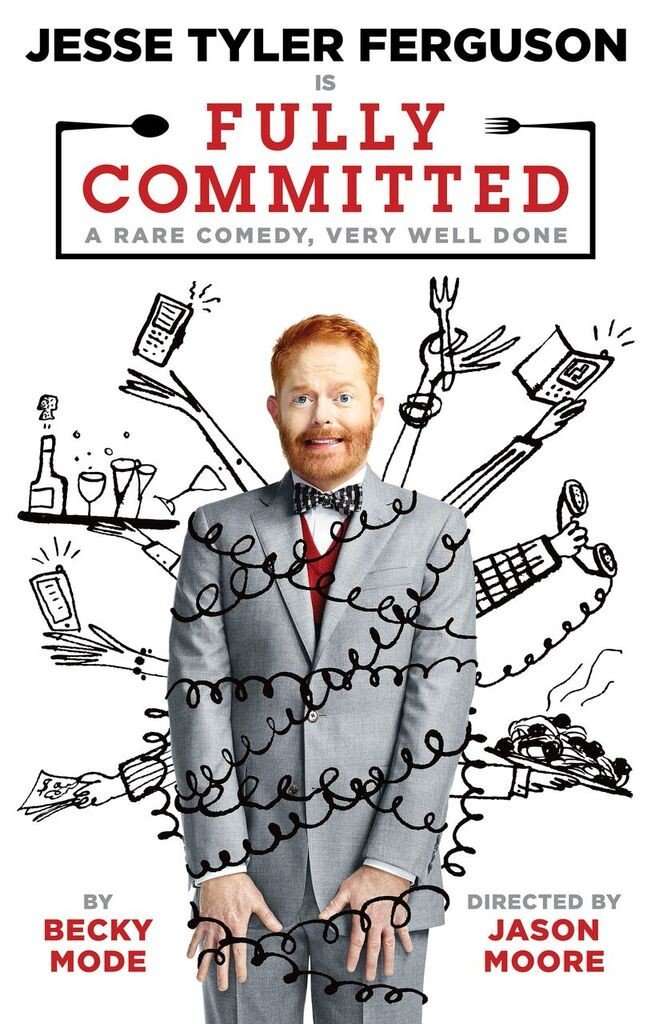 My heart burst into joy and laughter as soon as Jesse Tyler Ferguson hit the stage in the new Broadway Show called Fully Committed at the Lyceum Theater (see discount for you below!). If you haven’t heard, he is starting in a ONE MAN show playing over 40 characters. His main role acts as a restaurant reservationist in the basement of one of New York City’s fanciest spots who has to deal with hundreds of calls daily from people who MUST get a reservation that weekend. The story unfolds as his terrible co-worker calls in sick so he has to take his shift, miss lunch, deal with a pompous chef boss, and every other outrageous request that you could make up. The best part is that it’s all entirely realistic. The requests and demands reach a hilarious height and what raced through my mind constantly throughout was not “how are people so crazy,” it was”how in the world is JTF playing so many characters at once and keeping everything straight in his mind? The amount of times he switches between accents, gender, and conversations is truly admirable and terrifying. It also really enlightens you to pay more respect the hospitality industry and all the hard work these people do for us so that we the customers can have a lovely experience.  Jesse also staged and shadowed reservationists at top New York restaurants such as Gramercy Tavern, Eleven Madison Park, and Momofuku Ko to understand the role he was playing, how they handle stressful situations, and how customers behave.

One of the best parts is when Jesse Tyler Ferguson acts as Gwyneth Paltrow’s assistant namd Bryce who calls last minute to make a reservation for a party of FIFTEEN that Saturday night. Now remember this restaurant is a tough spot to get in in advance and as it’s portrayed as a fancy tasting menu where tables open and book up to three months in advance. The girl Bryce (which is really he because it’s Jesse) spoke in a super high voice, probably that of a 22 year old girl who just graduated from college, and requested that they make sure to serve her party a vegan only tasting menu with no sugar, no dairy, no fat, and obviously no corn! Then she called back ten minutes later yelling that they must change one of the sconces near the table as Paltrow thought it was too bright last time. Then there is the guy that tries to bribe him, someone who can’t find their reservation confirmation and promises they made it months ago, and an editor from Bon Appetit Magazine, and my favorite, a mom from the Midwest who had just seen the chef on the TODAY Show and threatened to write a negative Yelp review if he didn’t give her a reservation during her travel dates..

I don’t want to give away too much, but overall, I will say you don’t have to be a restaurant lover or involved in the industry to understand or love the show. Jesse’s characters, accents, swift movements on the stage, and lighthearted personality create an incredible, entertaining evening for all. For those of you who need something mindless after work and a show that won’t put you to sleep, this 90 minute (no intermission) comedy is right up your alley. Look out for the Sofia Vergara shout out!

The show is running now through July 24th so you better snag some tickets! In addition, the show has been kind enough to offer ChekmarkEats readers a lovely discounted rate of only $109 per orchestra or front mezzanine ticket using the following code FCNWL309 on TelechargeOffers.com (it won’t work on regular Telecharge). ENJOY!