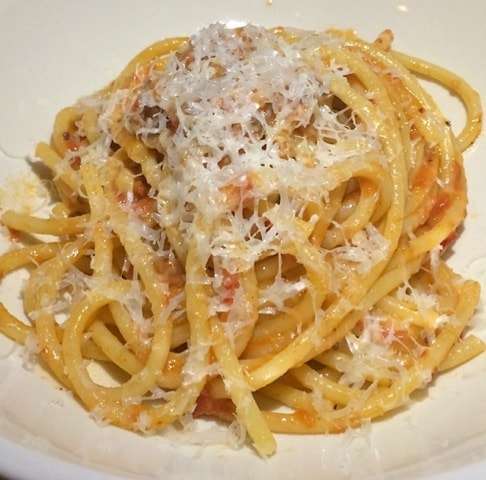 Why not add another restaurant to your empire, Andrew Carmellini? While we all mourned the loss of Peels, and its stellar Build-A-Biscuit brunch (with the worst service ever), the thought of adding an Italian, casual eatery to the NoHo restaurant group made it comforting. The turn around in the space was pretty quick, and they even kept the look of the huge potted green plant at the top of the stairs. It’s dark, can be considered romantic, and I love the big dome lighting upstairs that kind of resembles The Dutch. There is enough space to enjoy your meal upstairs and downstairs is a bit more of a social and fun crowded spot with a bar and a communal table. Maybe because it’s still brand new, but we saw big players like Wylie Dufresne from WD~50 and food editor Francis Lam relaxin’ all cool and checking out the pasta shop. 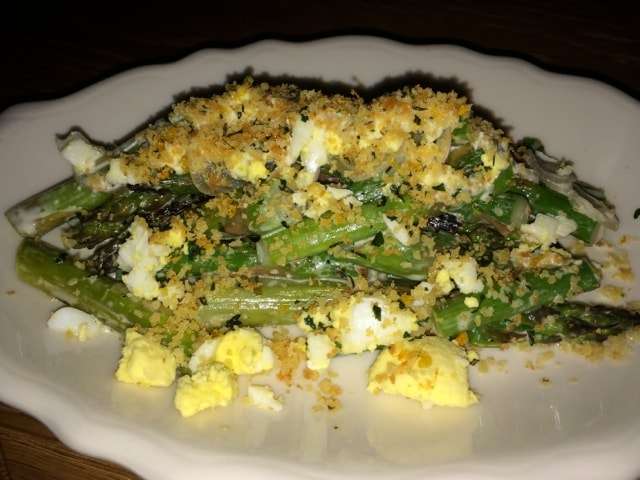 Grilled Asparagus
Bar Primi stands out from all of other Carmellini’s spots only because it’s downright affordable, casual and super easy. You pick a bunch of apps and a selection of pasta dishes and your done. Everything is $19 or under…score! More carbs for you- just in time for Hamptons season. For apps, start with the Grilled Local Asparagus with Egg and Gremolata because you need some veggies up in here. They even cut them up into pieces for you so you aren’t waving a whole stick of asparagus or dropping them across the table. It’s light, crunchy and satisfying. I loved the Seafood Antipasto. I’m never a fan of white potatoes in my seafood salad because I rather have more shrimp or octopus, but the portion of octopus on this plate is exactly what I needed. It’s tender so thanks. The appetizer selection really hits home. Next, we had the Stuffed Meatballs which fit in as a top notch dish in the ball competition around this city. The red sauce is chunky and enough for each meatball to swim in happily. However, while I  was busy fawning over this sauce, little did I know the rest of my table had cheese oozing out of their’s creating my mouth to drop because I was missing that special stuff! The table next to us had cheese in theirs as well so clearly I somehow got gypt. Welp, the bright side is that I was still impressed before my bubble popped at the site of the more luxurious, cheesy ones.

The three pastas we indulged in were the Spinach Cavatelli with Veal Bianco and Piave Cheese, Buccatini with Lamb Amatriciana and Fiore di Carciofi with Smoked Bacon and Pecorino. I can’t decide which pasta I liked more between the Cavatelli and Buccatini. One thing I will say is the way he cooks the pasta is more al dente than my preference, but I like that the dishes aren’t overly heavy or sauced. Michael White’s pastas, which I think are pretty unbeatable, are a bit more cooked but also on the heavier side. So you take your pick. I think I liked the Cavatelli more because of the shape and texture of the noodle, but the taste of lamb was more apparent in the Buccatini. Our Fiore di Carciofi which is a stuffed and coiled artichoke pasta tasted too doughy and raw. It makes for a great picture, but ours was definitely not cooked. 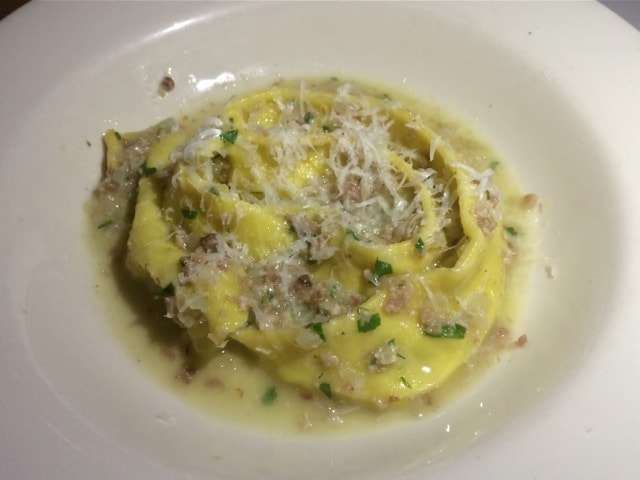 Fiore di Carciofi
Bar Primi is a total success not only because of the names behind it and not because it’s going to have the best Italian food in all of New York, but I’ll say it again and again, if a restaurant can make you feel special and as if you are encompassing magic fairy invincible dust, then it’s somewhere I’m going to recommend and look forward to venturing back to. Locanda Verde, The Dutch, Lafayette and now Bar Primi? Mr. Carmellini, you sure have a lot to be smiling about.