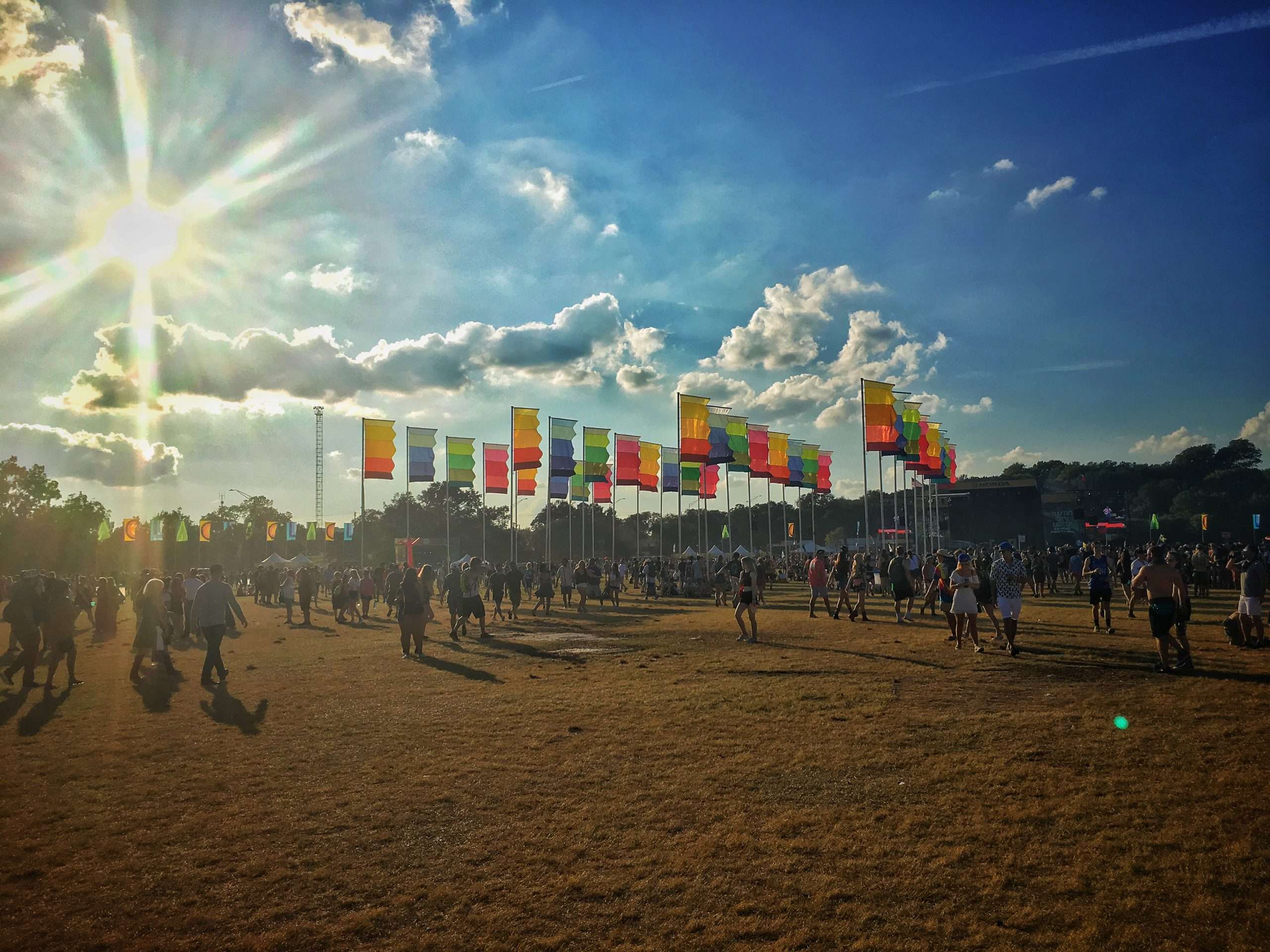 Austin City Limits Music Fest takes over the city every October at Zilker Park which is a 350-acre recreational area in South Austin adjacent to popular hike and bike trail, Town Lake. The land is transformed into a musical haven where you almost forget you are in the middle of the city and only a few feet away from your apartment. The fest shows up for two consecutive weekends with almost identical line-ups and several stages with downtown skyline views right in the distance. I went to this festival every year in college 8 years ago, and boy has it grown up! (anyone remember when Cold Play bounced out giant yellow floating balls during “Yellow?”) Years later, the food offerings, lounges, craft beer bars, wine lounge, and VIP experiences are incredible and over the top. I almost felt like I didn’t have enough time to check out all the activities and art market by the time the weekend was over (parents you can bring your 10 and under kids in for free and hang at Kiddie Limits, too!) One thing to remember is that Texas is HOT in October, and the sun is out blazing. Make sure to bring hat, sunscreen, empty water bottle to refill and even think about coming toward the end of the day around 4 p.m. to catch the later bands and avoid the heat. However, if you want to spend all three days at this festival, the best solution is to obtain the VIP Experience tickets. The VIP “shelter” aka an amazing shaded pavilion that you can bask in free of sun, unlimited coconut water and H20 troughs, a Tito’s bar with great lemonade mixers by Shade Tree (get strawberry over blueberry), a Don Juilo truck which is the only stash in the whole park, California’s Aviator Nation boutique (if only they could ship those cute sweatshirts home for free as there’s no way I’m wearing that now), Viva Day Spa massages and manicures, a braided hair and jewelry sampling by Kendra Scott. Crazy, I know this is all in here, and I still haven’t mentioned the food or music. Oh, also, major respect to C3, the local management company who puts on ACL, as they were smart enough to stream the Texas vs. OU game on a big screen in here during the second weekend. This is where you can find all the men, ladies. 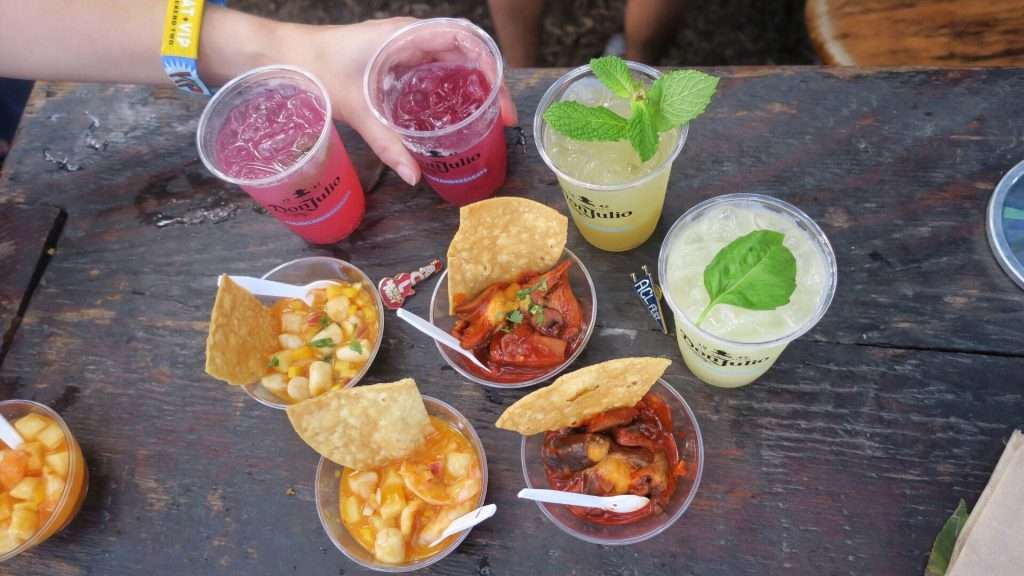 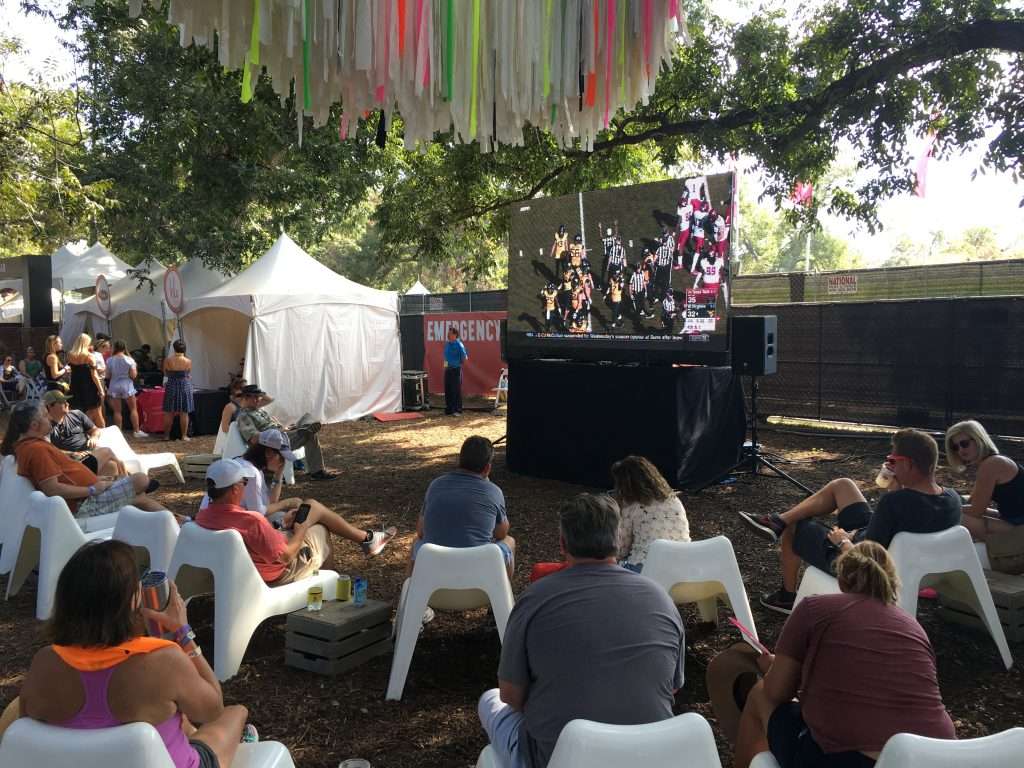 There is a constant flow of local restaurants serving food in here daily should you be worried about starving. They serve lunch in the afternoon with a Happy Hour from restaurants such as:  Fresa’s, Uncle Billy’s BBQ El Alma, Frito Pie bags from Ranch 616, and full fajita and pasta/salad dinner buffets provided by Central Market from 5:30 p.m. – 7:30 p.m. There were also personal bags of Little Lucy’s Mini Donuts in Hot Pink paper bags should you want to sneak those in your purse to take out to the shows. I did scope out the ACL Eats tents and of course got some edible cookie dough with sprinkles and fudge from vegan bakery Skull & Cakebones. I FINALLY FOUND EDIBLE COOKIE DOUGH IN AUSTIN THAT LIVES UP TO NEW YORK’S COOKIE DO STORE. Thank you!!! There is also pizza, tacos, bbq nachos, Mighty Cone, Amy’s ice cream, fried mac ‘n cheese balls, and probably anything else you might crave around the grounds. 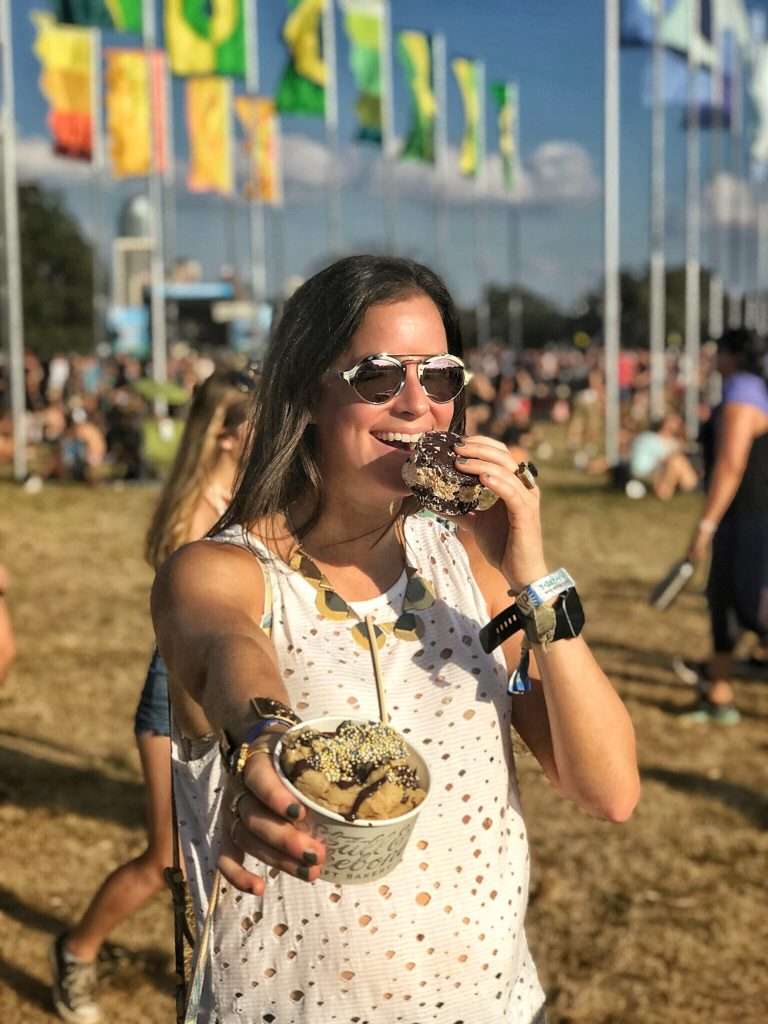 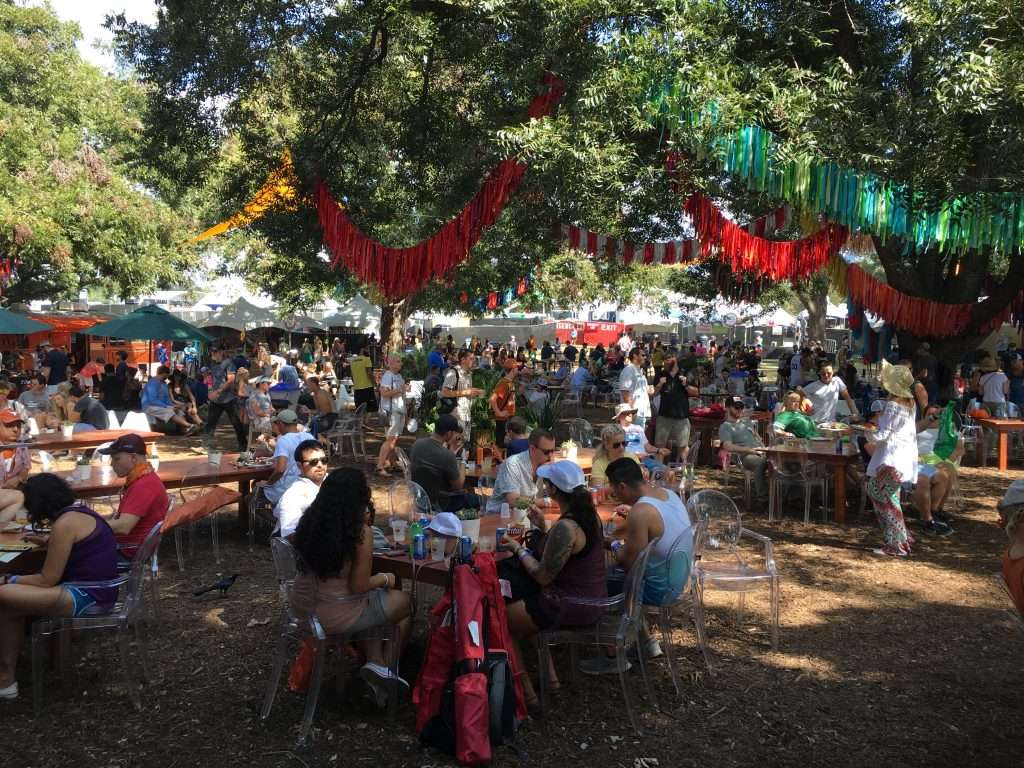 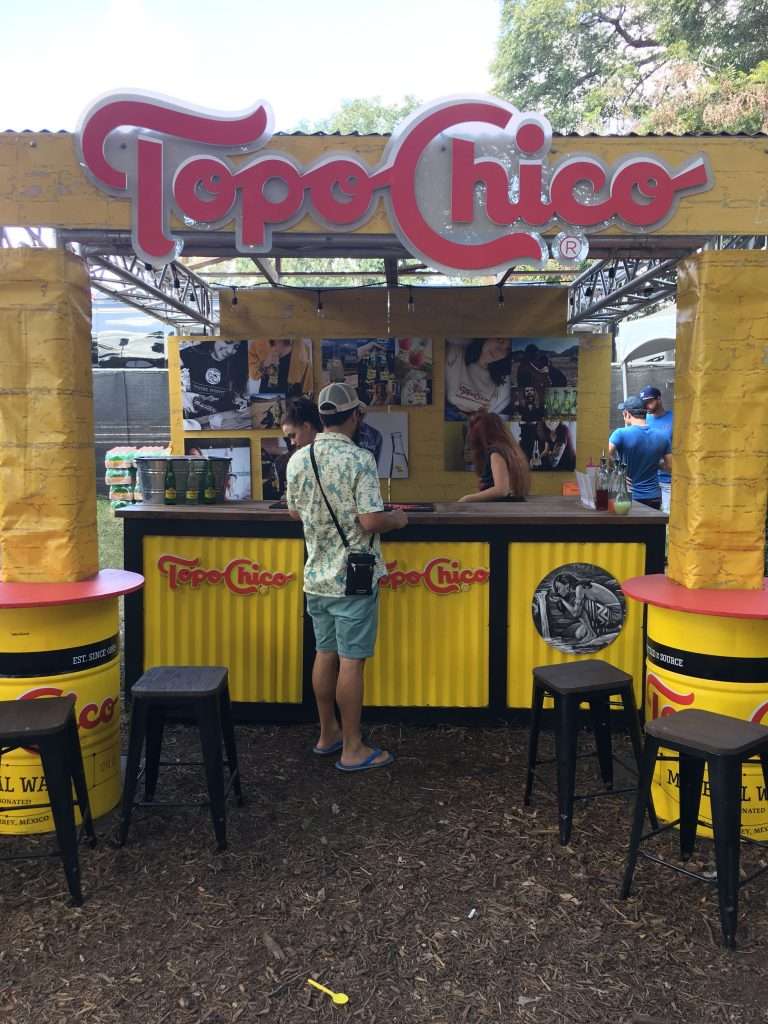 Once the sun went down at 6, we were ready to party on the field! I was actually late to the show Friday and thank goodness I had my VIP entrance wristband or I would have had to wait at least an hour to get in. I sprinted onto the field and ran straight for the AMEX stage to see Foster the People. I really love their new album Sacred Hearts Club and they really rocked out on stage with their full hearts. I’ve seen them before at Central Park’s Rumsey Playfield, and their tunes are very uplifting, carefree and danceable. Luckily, I ran right into a friend as I made my way to the front. Who knew you could run into friends at festivals– great timing since I was alone anyway! We caught some fire and explosions on stage from Martin Garrix which took me back to my club days in New York City and made me long for Miami. As we lined up for Jay-Z, it got pretty packed, and I do have to say it was one of the first festivals where I could barely see the main act. He doesn’t do much on stage or have any scenery (well he did bring a sweet Jeff Koons gold dog). However, I prefer a little more entertainment, a light show, some dancing, inspirational words (I KNOW IT WAS JAY-Z!!!) Did I dance my face off when he sang Empire State of Mind or Ni**as in Paris? Sure did. 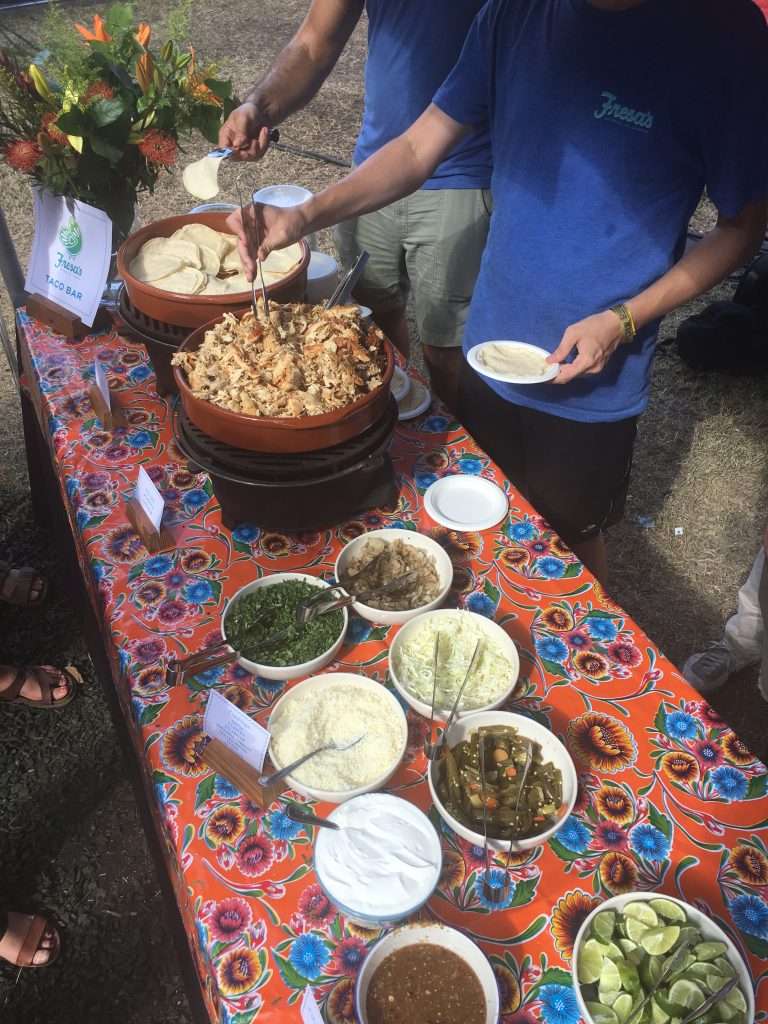 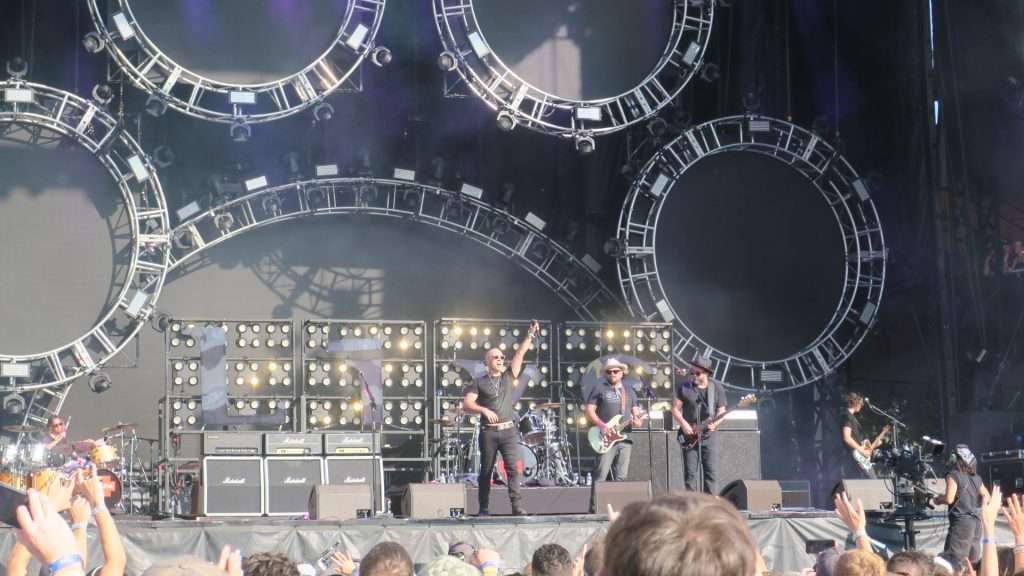 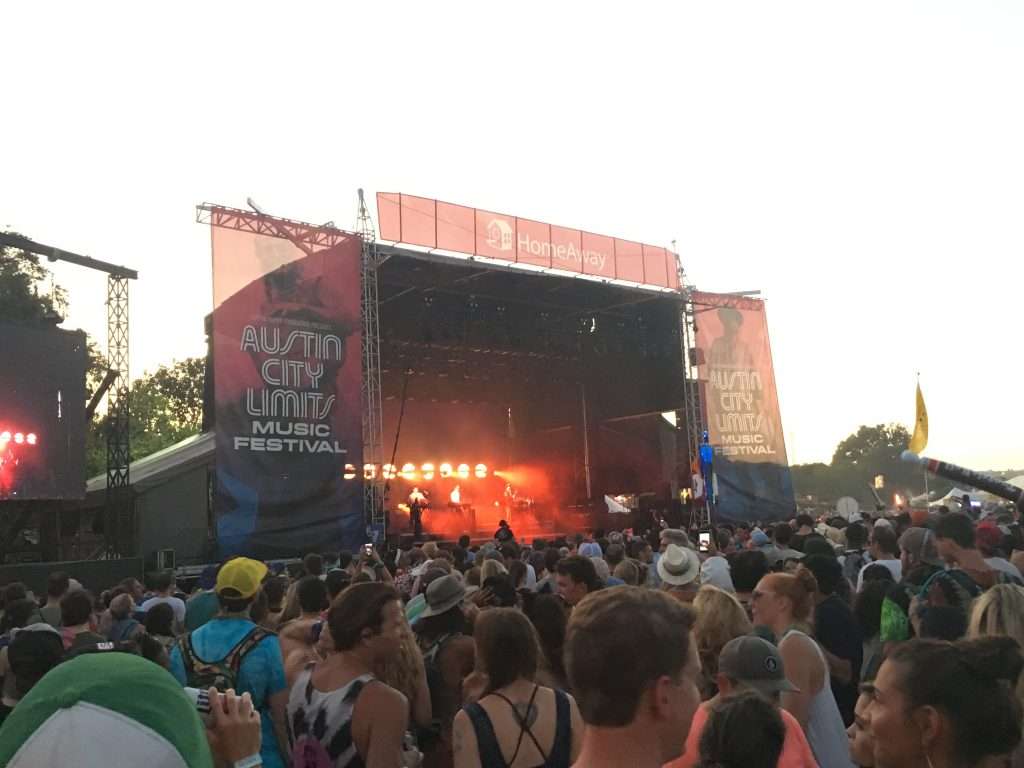 The great thing about music festivals is if you’re like me and know a lot of general music but maybe not all the bands who sing them, you are pleasantly surprised at any stage you pop in to because you’ll recognize and boogy to at least one performance! For example, seeing the 90’s band LIVE and hearing “Lightening Crashes” brought me back to my high school days when my older brother who is 10 years older than me drove me to school every morning and I learned all the hard rock music that year. There was so much space at this stage and the band showed a lot of love for each other at the end. Heart warming. Rufus de Sol, the gorgeous Australian blonde guys put on a great show as the sky darkened. Lots of red and blue lights streaming out of their stage and a cute face made it hard to not enjoy ourselves. The beats made for a fun dance party as well. The bell of the ball for me were headliners Red Hot Chile Peppers and Chance the Rapper. Red Hot was at the AMEX stage which obviously fills almost half the park! Everyone knew every song and it was quite moving to sing together with the entire park and have all these old memories and tangible feelings resurface from all the years of listening. We jogged on over to Chance the Rapper a the other end of the field to catch a few songs. You know what? He was my favorite! Bouncing like a jumping bean from side to side, feeling the flow, loving the stage, popping off fire works behind him at every chance he got, he is quite the entertainer. The way this stage was positioned, you could really stand off to the side, still see him, and enjoy your personal space. I guess you know you’re 30 when you stop fighting for the front and can still have fun without sweat pellets from the star hitting you in the face. I also really loved his old school Champion emerald T-shirt. I think we can all agree that he was probably the best performer of the weekend. Young lad! 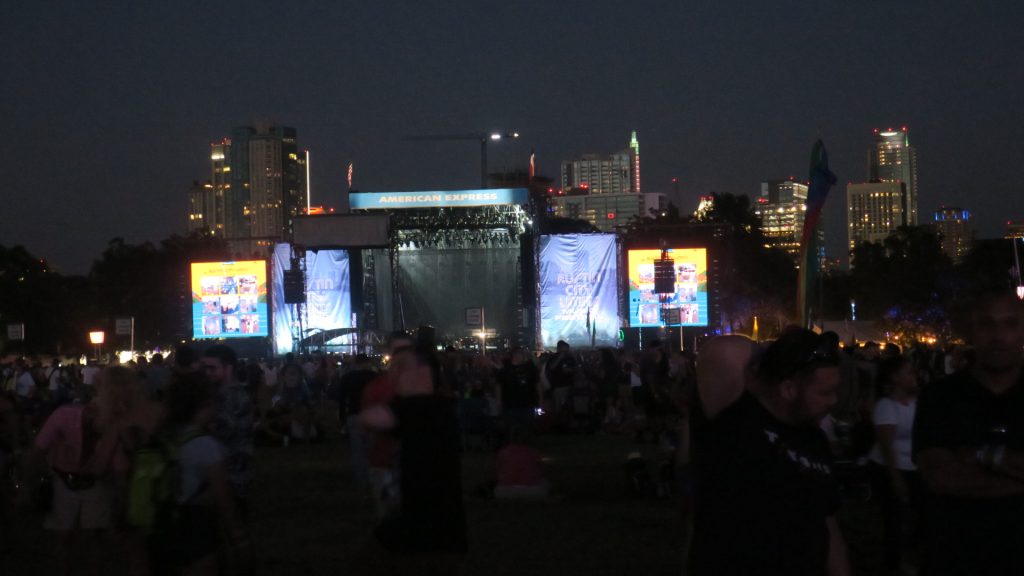 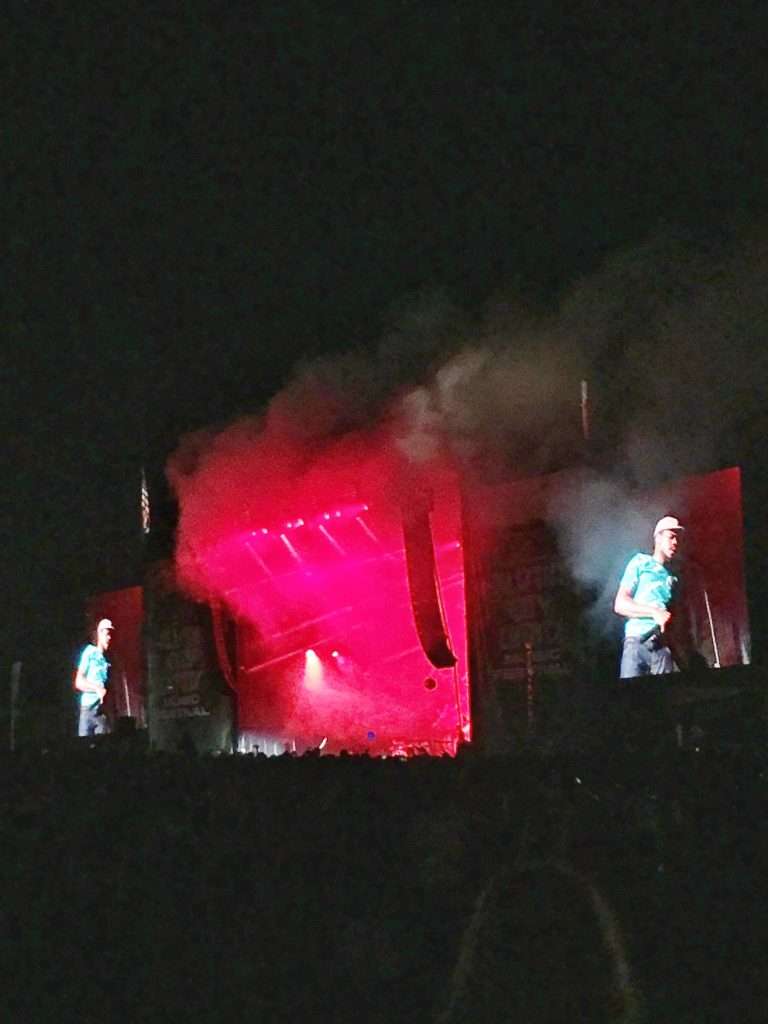 ACL does amazing things for the city of Austin. Dancing with people from Australia, LA, and people from all over the world is not something common for this small Texas town. Singing our hearts out in the middle of the city without having to take a train, ferry, or bus to get there makes it an extremely easy festival to attend. Especially if you are flying in, it’s only 20 minutes from the airport unlike those who set out for Coachella each spring. While the VIP Experience can be pricey, it’s a super memorable time and something I’d recommend doing at least one day. You probably end up spending close to the same amount on food, booze and water as you would if you bought a GA ticket, but this way you save time waiting in lines and wont be sun-struck. 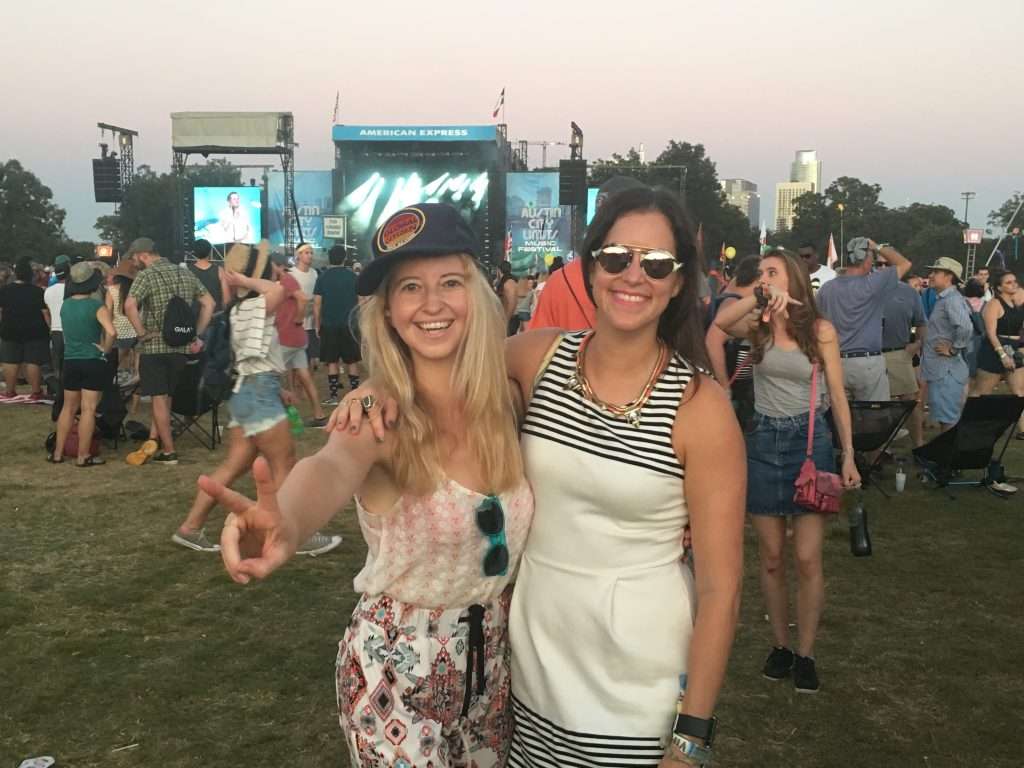